Issue #102 of The Walking Dead

With Issue #102 we get the last chapter of the “Something to Fear” story-line. It is another well written (aren’t they all?) and gripping conclusion which involves Negan, The Hilltop, Alexandria and a mysterious prisoner that Andrea has taken captive.

When Rick returns he discovers that Andrea repelled about 50 or so men from invading the Community. She also has a captive tied up ready for Rick. She pounds on Dwight as he spouts off threats about Negan taking revenge on them all for killing his men. Rick stops her and she becomes confused as to why Rick does so. He tells her about Glenn and she reacts angrily but he tells her that it isn’t the time or place yet. He admits to being powerless and making some bad choices. He is rightfully afraid that Negan will return with many more men and that he’s open to suggestions.

Heath show Jesus to his own house and tries to reassure Heath that he will try his best to help them all out regarding Negan.  Carl and Rick have an exchange in the kitchen about the prisoner. Carl expresses anger then apologizes for his outburst. Carl wants the prisoner killed for having caused Abe’s death. It is a telling moment in what has become an interesting angle regarding Carl’s upbringing and maturity. Afterwards Rick tells Andrea that he can’t stop thinking about Abe and Glenn. He tells her how much Glenn had meant to him from the very beginning. He wishes things had gone down differently and dwells on various scenarios including if Andrea had been the one out on the road, maybe Glenn would still be alive. Andrea tells Rick not to blame himself because he has always protected them. And that it is his fault that everyone LIVES. Cool stuff huh? Kirkman and that dialog…sheesh , the guy just keeps surprising me.

The next morning Rick visits Michonne and she is a bit frosty to Rick at first but changes her tune quickly. As they speak Michonne tells Rick that she won’t have any problem backing down and yielding to Negan and his men if the odds are insurmountable. She needs a break from all the fighting and if she has to stop fighting “to live” she would do just that. Rick is grateful but surprised by her response to the bad news. She tells Rick that she feels guilty for the attack on the prison because of her attack and revenge on The Governor. 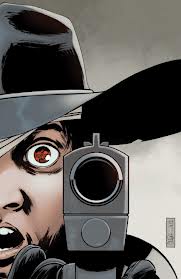 Eugene tells Rick that he and Abe were working on a project and he lets him know that if he can get to where he and Abe were going he could actually contribute and start making bullets and ammunition for the group. At a community meeting Rick’s plan to let Dwight go does not sit well with Andrea and Rick has to confess to them all what happened to them on the road and eventually Glenn. He then lets Dwight go and in turn has made all of the community including Carl angry and resentful towards him.

Jesus tries to comfort him to no avail. Rick then proceeds to tell him to pack up and follow Dwight. Also to keep their plans between them only. Here the issues ends and leaves us on a precarious edge regarding the future of Rick and the others. Hope you all enjoy this awesome issue that actually has no zombie action whatsoever. That is no problem at all though since we get treated to some great drama and developments. Until next month! Enjoy.