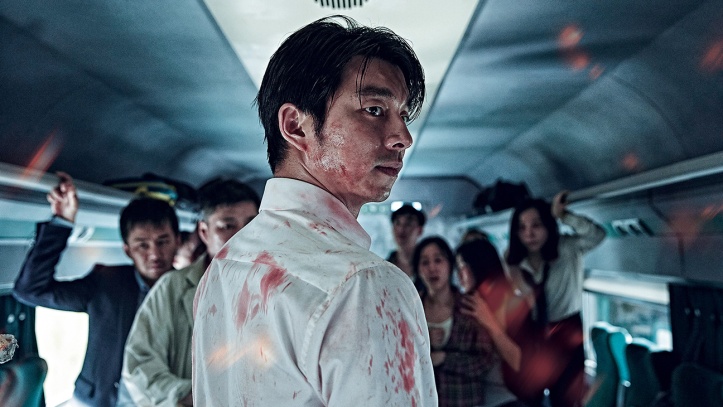 While a zombie-virus breaks out in South Korea, a couple of passengers struggle to survive on the train from Seoul to Busan.

Damn. This film is crazy. No really, it’s crazy. Pretty damn nuts. It’s been a long while, probably since Zack Snyder’s DotD remake, have I watched an unpretentious, lightning speed work of modern horror zombie art like Train to Busan from South Korea and from director Sang-ho Yeon. Taking it’s que from Danny Boyle and suspending the more conventional slow zombie trope and making the antogonists “infected,” Yeon’s film takes on the same frenetic momentum that 28 Days Later, and even to an extent, World War Z, demonstrated. What Yeon does differently, here, is add a dynamic array of characters, a straight narrative with answers to questions and, of course, the most important thing: Confines the horror to a speeding train. Zombies on a Train? Yeah, sounds like a bad SyFy channel flick, right? Wrong, kiddies.

Yeon’s film is a train ride you must catch on time and enjoy simply because even when setting up important things like working and corporate class division, familial strife, melodrama, and precarious social and environmental issues, the movie is a relentless shot out of a horror cannon. Yeon’s messages never get too deeply rooted or profound, making way instead for close calls and hazardously loaded exchanges between characters. Stereotypes do abound, though, don’t get me wrong, but it’s done here for the sake of “set em up and knock em down” terror antics. Some of the messages and gimmicky social commentary may induce an eye roll here and there, but it isn’t always expedient. What Yeon does best is providing breakneck action sequences that are staged appropriately and tirelessly shot with the utmost attention to the claustrophobia, tension and horror that permeates aboard the train. 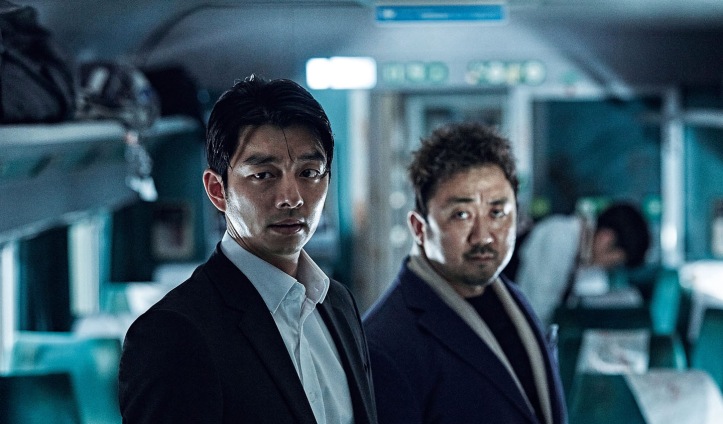 Actor Yoo Gong (Silenced) sympathetically portrays Seok Woo, a troubled Investment Executive, who handles a lucrative industrial company, which appears to be tied in, if not directly responsible for the environmental calamity that has befallen South Korea. Yeon establishes early on in the film that this incident affects not only humans but animals, too, in a very alarming scene involving a deer struck down by a truck driven by one of the company’s employees. Woo is expected to deliver his young 9 year old daughter, played by the wonderful and emotive Soo-an Kim, to her Mother, estranged from Woo, in Busan after her visit with him and her grandmother ends. Woo’s work troubles spill over into his personal life when his relationship with Soo-an grinds to a halt by his non-presence in her life (He even missed a recital which is a big daddy no-no). She astutely picks up on his shortcomings as a dad and her absence from her mother causes her to anxiously await the train trip back. Woo, who is trying hard to be a good father to Soo-an, can’t seem to get out of his own way and cannot seem to patch things up straight with his daughter.

Yeon propels the story very quickly and establishes all the characters on the train that are going to flesh out the gruesome canvas that the film paints on. Yeon, by introducing enigmatic passengers with bite afflictions boarding the train, catapults the movies into familiar, but still exciting territory. Also added in is a homeless stranger who makes it onto the train and hides in a bathroom. The stranger, though, appears to not be bitten or harmed, but just scared and in an iffy state of mind. Needless to say the ball is in Yeon’s court now and the fun begins. TtB is stylishly shot within the tight confines of the train and even the generous open-ness of the accompanying train stations, where the quickly depleting motley crew aboard the train, struggle to survive.

The excitement is relentless, as is the suspense, and the interactions between the characters feel real and their plight and panic never feel shoe-horned or trivial. Yeon makes sure that when things don’t appear to be able to get worse, they actually do and the mayhem and un-expected dispatches of many established characters is a testament to the reality the characters face, on and off the train.

Actor Dong-Seok Ma plays the love-able, scrappy and big Sang Hwa, who is initially introduced as a cheeky, insult slinging bad ass. Hwa’s only concern is to his pregnant newlywed and he’ll fight legions of un-dead in any way he can to protect her. Even if that means making Woo look inside himself to help her and his own daughter. Woo, who is apathetic and uncaring of others at first is called out numerous times by his daughter, who is the most conscientious character of the whole movie. Even Hwa sees it when Woo does not. 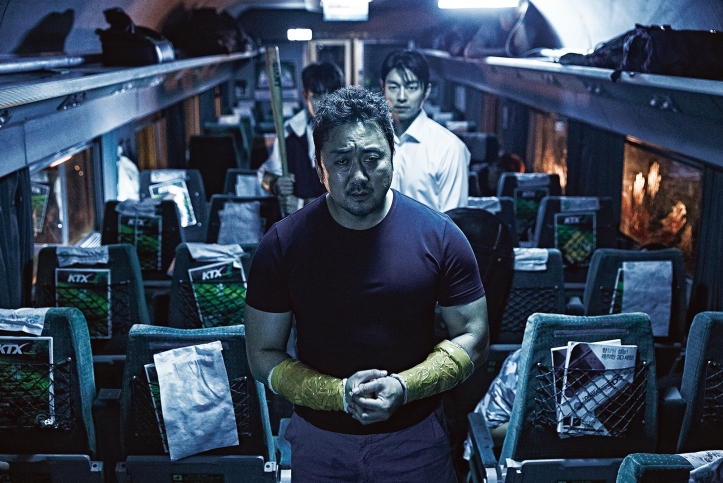 That is another reason that TtB really works. It’s the father / daughter dynamic that changes Woo and the creatures hunting them down extracts the person that Woo once was. It only takes a fiesty stranger and his daughter to bring it all out into the open, only to face the dangers more confidently and with more endurance than they ever thought they would ever need.

TtB is a film of relationships and exchanges, but we also get a corporate bad guy that is as sleazy and self serving as we can get, along with a team of brave baseball players, a love lorn young man, a pair of elderly sisters who begin to cherish each other in the face of certain death, and a heroic train conductor who only thinks of the safety of his passengers. It all almost harkens back to the pastiche of the great disasters films of the 1970’s. Granted, many of these people don’t make it to Busan but they fulfill a purpose, and that is for Yeon to show us how fragile life is and how much we usually take for granted before it’s too late.

The horror action is insanely paced and never lets up. There are chases, close calls, blood, bone cracking zombie transformations and even derailments and explosions, to boot. The film takes very small respites to further some character development before crashing back into mayhem and commotion. 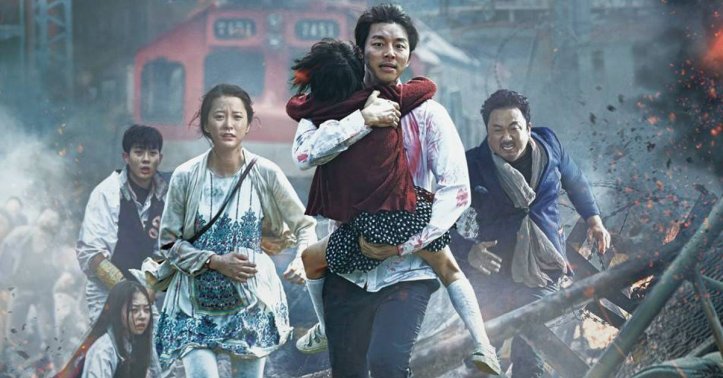 The film is inventive in it’s depiction of the survival tactics the characters in peril use in order to prevent themselves from becoming infected. Everything from cell phones to bats to bathrooms. It’s all here, gang. The infected themselves are relentless and never let up, like it should be. They run, jump, growl, distort and even create crazy zombie body ramps, all in order to get to their prey. They are raw, menacing contortionists that are indeed very scary and the energy the actors put into the parts explodes from the screen.

Train to Busan is a smart film that is about humanity albeit with a flair for melodrama in parts. It’s enjoyable not only for it’s mayhem but for how the actors portray the hapless victims caught up in the nightmare, fighting for their lives. It’s a very approachable dynamic that works, here. The movie is clean but gory. (not by any means a gorefest, though). Efficient but untidy and blood curdling. It’s bold, brashy and impetuous in parts and the occasional self indulgence is tolerated. 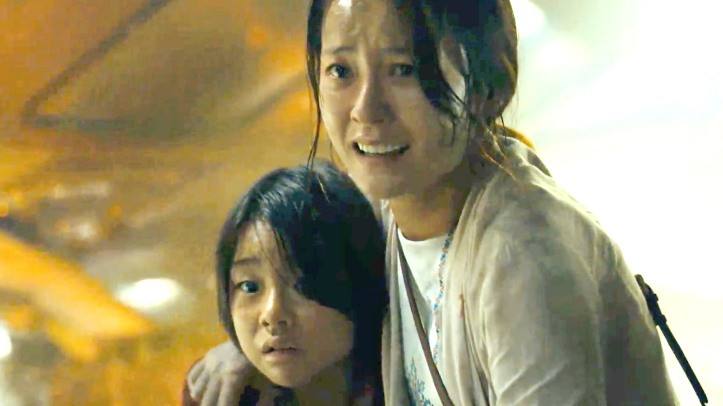 Yeon directs a sleek horror film that goes from terrifying you to making you choke up in the span of two hours. It’s a deep film in parts and the melodrama doesn’t keep it from bogging down into slushy hysterics. Yeon’s tight and intense handling of yet another entry in the zombie genre is quite refreshing and actually redeems the genre somewhat. As long as more un-recycled, altruistic, observational horror films like Train to Busan come out then Z flick lovers should be good to go into double dipping in movies as well put together as this one. I highly recommend this one, gang. Enjoy!