Robin is sent to work with the Teen Titans after his volatile behavior botches up a Justice League mission. The Titans must then step up to face Trigon after he possesses the League and threatens to conquer the world.

Acclaimed animation director Sam Liu helms the latest DCU effort in “JL vs TT” (Yep, it has a “vs” in the title. Wink. Wink.). This is the 24 or 25th DCU animated feature, I believe. I’ve actually lost count. As is the routine with the DCU films, the big guns, The Justice League, are brought out to start off things with a big, loud and grandiose battle in the middle of the City, with the Legion of Doom, no less. Each of our fave heroes (Cyborg, Bats, Flash, Supes and Wonder Woman), fighting their villainous counterparts, get chances to shine in the early fisticuffs with the baddies.

While all of this big, bam, boom is going on we get to witness the lastest Robin, the impatient Damian Wayne (Stuart Allan), sitting on the sidelines grudgingly taking orders from Batman. The ensuing battle manages to lead up to Damian taking things into his own hands with the Bat-Wing and some Missiles, in order to stop Weather Wizard, who is taken over by a yet unknown entity.

After the bratty, querulous and grousing Damian is tore a new one by Batman (with humorous defending by The Flash and Superman taking place), Robin is driven by the first Robin, Dick Grayson (now Nightwing voiced by Sean Maher) to the HQ of The Teen Titans, in a sort of “exile” boarding school move by Batman. There, he is to try and and fit in, in a team environment. And Robin is none too pleased. As Nightwing tells Starfire (Kari Wahlgren), Damian has had no childhood and has spent his formative years learning to kill. And it shows. Liu shows us Damian’s baby steps into getting used to being part of the team but not without it’s roadblocks. He’s still prying, suspicious, defensive, moody and combative (he even picks a fight with Blue Beetle and gets pretty messed up) to just about every one in the group but I did like the brief “X Men” – like dynamics woven into the story and the characters.

From the film’s onset we are introduced to what will be the antagonist and main plot filament that binds the film: Trigon (Jon Bernthal). Trigon being an infernal inter-dimensional bad ass that can possess the heroes (he tries his hand at Superman as well), and after a Carnival showdown with demonoids, we eventually discover a familial connection to Raven (Taissa Farmiga), who Robin has taken to in his own inimitable way. Raven gives us some backstory and then things become quite clear, then we are off to the races. The JL are taken over by Trigon and the TT, headed by Damian as determined to help Raven at any cost.

“JL vs TT” has much to offer in terms of hero interaction, inevitable humor and clashes (watching Superman get the JL back to “normal” was rad), which are well rendered and dynamic and one could expect no less from a DCU animated quickie like this one. It’s short running time, clocking in at 80 mins or so, works in it’s favor, too. There is no real time left for too much exposition (except on Raven’s part) and even though there are some missteps in coherence and logic, the movie plays out pretty fast and furious but it all stills feels rushed and under-cooked in places where maybe catching a breath would have added more cohesive-ness. But in the end it may all just be nit-picking when you go in with tempered expectations.

Liu’s film can feel entry level at times and can come across routine in it’s execution story-wise and the secondary like trappings can distract, but not terribly. It’s a decent time waster to get your JL superhero and animation fix all rolled into one, but don’t expect another “War,” “DKR,” or even “Flashpoint Paradox.” Damian’s arc is resolved nicely but with a bit of melodramatic flourish and yeah, he’s still kind of a jerk. Plus, Batman has been given next to nothing to really do here, but lay around knocked out, which is a shame. (Oh and stick around for an enigmatic little scene during the credits) 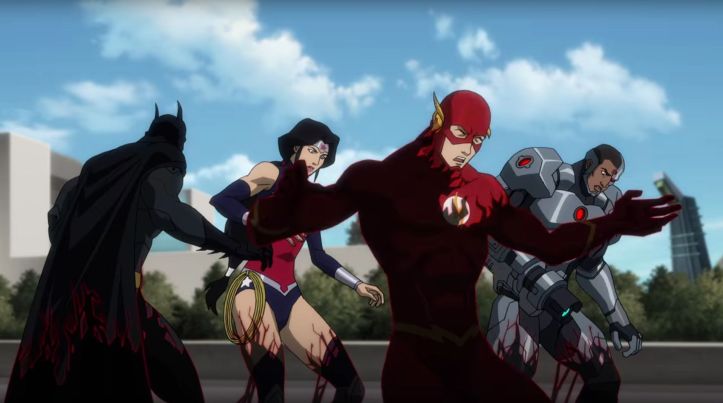 This DCU flick one has an ok Saturday morning vibe that is none too shabby if that’s what you need. Definitely consider as a rental first before a purchase unless you are a completist and need it in your DCU Animated Collection.