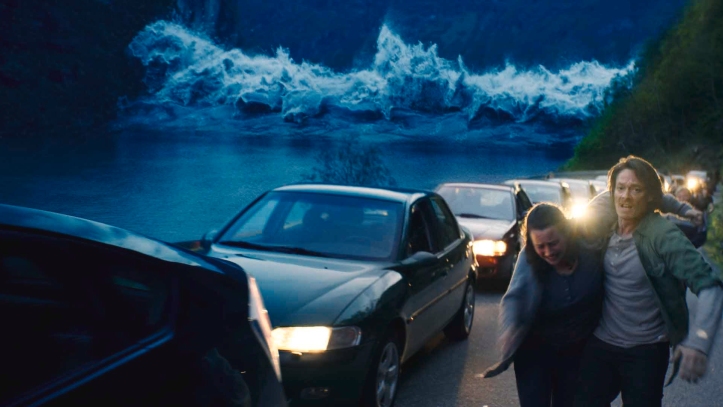 Even though awaited, no-one is really ready when the mountain pass of Åkneset above the scenic narrow Norwegian fjord Geiranger falls out and creates a 85-meter-high violent tsunami. A geologist is one of those caught in the middle of it.

Roar Uthaug, the director that brought us the thrilling slasher “Cold Prey,” from 2006, thankfully delivers an astute, serious and mindful disaster film in “The Wave,” from 2015. I feel strongly that Uthaug, perhaps subconsciously, strove to prove that not only Hollywood has the corner on the big budgeted disaster film market. And Uthaug proved it rather nicely, here, in this Norweigan film from Fantefilm and Film Vast productions.

What one notices right away about “The Wave,” is it’s sincere and attentive characterizations and warm scrutiny of a family in Akneset, one of whom is a geologist named Kristian (Kristoffer Joner), who is leaving his job and Village to pursue a headier job with a big oil company. This, in turn, prompts a family move and Uthaug insects the various dynamics between his wife, Idun (Ane Dahl Torp), and kids, Sondre and Julia. 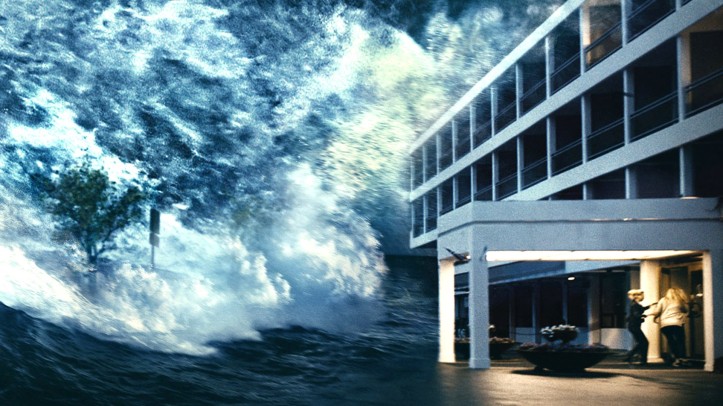 He is a positive husband and father and likes to joke with his daughter and respectfully and paternally approaches his son while he broods about the move. Kristian, also, is a very dedicated geologist, and on his last day with his co-workers (after they toast to his new job), he shows some concern about water levels dropping in a nearby fissure on the closest mountain range to the small village.

He looks into past records and his concern increases as he delves deeper into the strange readings deep within the mountain. Worried that he may be on to something dreadful , and that an ensuing landslide into the Fjord waters may create a deadly tsunami, Kristian tries to convince his ex-co-workers that catastrophe is heading their way with the mountain about to set free a large chunk of itself into the waters below it.

But of course, things are too late, and after 2 other geologists look into the fissure personally, the mountain fissure expands as grave tremors and quakes endanger them. Eventually, the mountain lets go of an unfathomable size of itself and plunges into the waters. Kristian desperately achieves to depart with Julia after he finds out what has happened, races to a nearby tourist Hotel where his wife works and his son is staying in a room. Idun persuades him to not go after them since they are evacuating and leaving in a bus. Kristian makes for higher ground but things do not turn out as planned and Kristian is forced to go back for Idun and Sondre as they remain trapped in the bowels of the Hotel after the tsunami hits.

Before I get to the disaster part of the review (and even then I will not spoil anything), I want to focus on how Uthaug’s films deviates from hokey cliches seen in other like minded efforts like “2012” or “The Day after Tomorrow.” The film goes more the route of “The Impossible.” There are many characters to like and Kristian is a good and mindful person, and even though his job and vocation gets the best of him sometimes, you can really feel his earnestness and you know he loves his family.

Also, refreshingly, there are no estranged characters, dysfunctional families, bad guys, or even some loony scientist that cries wolf all the time. The family dynamics are played straight and real. Another thing is the division of the family members within the story (Julia and Kristian at the house for a last night sleepover and Sondre and Idun at the hotel) makes sense and feels integral to the movie since it is a springboard to get the action and peril in motion.

If “The Wave” is anything, it is very authentic and uses the technical geology jargon to good effect. You really feel that this is all happening and the actors convey at first a disbelief that anything dire could happen to the mountain, to then nail biting fear and a fight for survival. Uthaug builds solid suspense in the first 35 to 40 minutes with mostly dialog and exposition about the scientific aspects and revelations regarding the fissure, but when things get going then “The Wave” becomes a tried and true freight train of a disaster film.

When disasters strikes, it is just in the form of one beautifully executed sequence. The Wave is shown as a beast slowing approaching it’s prey in the form of the nearby village and it is quite a spectacle. It happens straightforward and the last hour is spent on the aftermath of the tsunami. At first, I wanted more scenes of bloated destruction since after so many years of watching things get destroyed and devastated, I was left a sort of mayhem and destruction junkie. But it is not needed here, afterwards, Uthaug delivers a harrowing search and rescue movie after the initial disaster pummels the Fjord and village. It is deeply moving in parts and very edge of your seat, in others.

There are very scary moments in “The Wave” and the film does not glorify the destruction as much as it shows us some very sad, deadly and desperate situations making the movie all the more touching and disturbing.

“The Wave,” pre-disaster, is a beautfully shot and lensed film by John Christian Roselund (Just wait until you see those wide shots of the Fjord and the mountains!). It also sports a very nice James Newton Howard – like score by Magnus Beite (Cold Prey, Ragnarok). The star is not the disaster, in which they show blessed restraint with, but instead the characters and the actors. Yeah, some cliché may be found here and there (perhaps the “happy ending” and the old “let’s not scare the tourists” ploy) but it is very fleeting and insignificant to all of the rest of the spectacle and suspense that permeates this very well done Norweigan production. Highly recommend. Enjoy, gang! 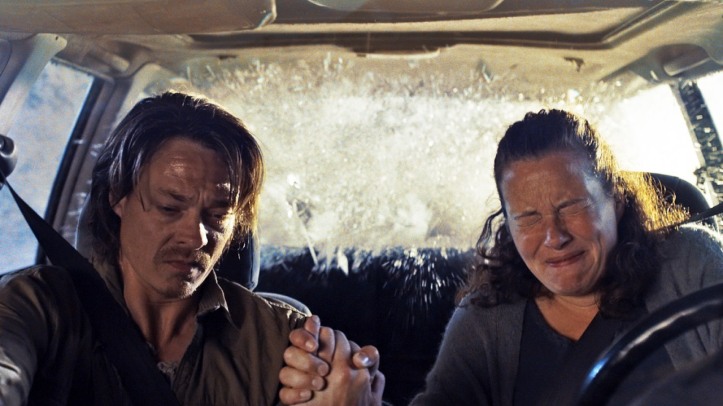