A small town sheriff sets out to find the two kids who have taken his car on a joy ride.

With “Cop Car,” director and co-writer, Jon Watts, solidly makes the point, that maintaining one’s innocence and youth can often come with a steep price. He makes that case with co-writer Christopher D. Ford, that some very impulsive, spontaneous and knee jerk choices can really mess up your day or, more menacingly, your life. It is a volatile and ugly consequence that befalls two daring, opportunistic and reckless boys on a simple journey to nowhere.

James Freedson-Jackson plays Travis, the dominant child to Hays Wellford’s Harrison. Watts’ Directors of Photography, Matthew J. Lloyd and Larkin Seiple, exquisitely open the film with the two boys in front of a beautiful landscape. Gorgeous shots of the surrounding foliage, wide spaces, rocks, roads and fields immerse us in a picturesque pallate, with the 10 year boys in the foreground, hell bent on uttering every curse word in the book. While doing this, we percieve the kids to be everyday, normal pre-teens but eventually we discover that they are actually runaways (with an affinity for slim jims), or so they really think they are. Didn’t we all try to hatch hare-brained schemes at that age, which included running away, so we could make our parents freak out?

The boys, who exchange delightful and natural dialog with some adult overtones, aren’t actually looking for trouble. They instead just continually walk to see where they end up and if something happens to come into play on their journey, so be it. In a very cool moment, Watts uses a barbed wire fence as a indicator (and as swift visual trickery) to show us the disparities between the boys (Travis is the braver, outspoken one and Harrison is more subdued and careful). Travis easily makes it through, effortlessly, while Harrison does not. Later we see more of that disparity but eventually the boys both become one entity in their struggle to survive a one Sheriff Kretzer played with intimidation and threat by Kevin Bacon (Stir of Echoes, The Following, Death Sentence).

Watts pulls a Kurosawa and manipulates the timeline to introduce Kretzer, who appears to be a pretty shady, subversive and clandestine fellow. While uneasily trying to dispose of a dead body (supposedly dispatched by him), Kretzer returns to his Police Cruiser only to discover it missing. Yep. Missing. Oh boy, he’s in trouble, but not as much as the two young rascals who happened upon it a few minutes earlier in the movie.

As the boys eventually discover the abandoned cop car, the two literally don’t know how to contain their entusiasm at the appearance of the vehicle. The runaways freak out and as a result of their daring nature, they advance on the car and after some trepidation, overcome their fears of discovery and jump right into the driver’s seat. Literally. The boys, using their fertile imaginations, pretend to be on a high speed pursuit, find the cop car keys and then things get really complicated. They start the vehicle and pull off on a rip roaring adolescent joyride. Little do they know that Kretzer, while in the thick of things will be hunting them down to retrieve a something…or someone still hidden inside the trunk of the cop car. 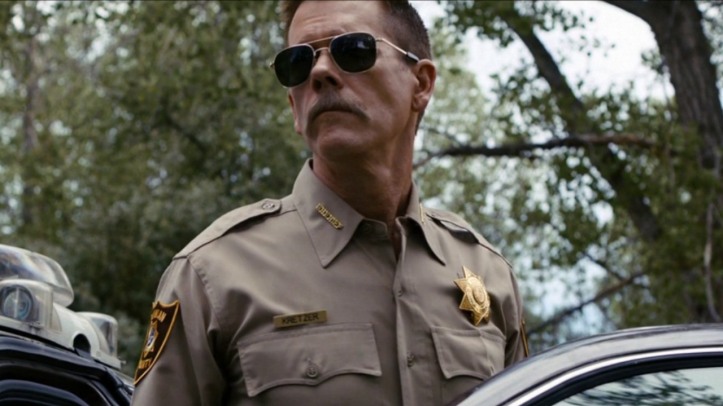 Watts and Ford tightly tell this short tale with as little exposition and extraneous dialog as possible (there isn’t much of a back story either), leaving overt stylish flourishes, one would expect, out of the picture. With the first part of the film portraying the boys talking realistically to each other, without sounding forced and trite, then the second half uses action and suspense to build steady momentum. Eventually, we find out what Sheriff Kretzer is really into (a bit of murder, drugs and extortion, duh!) and it’s not good. 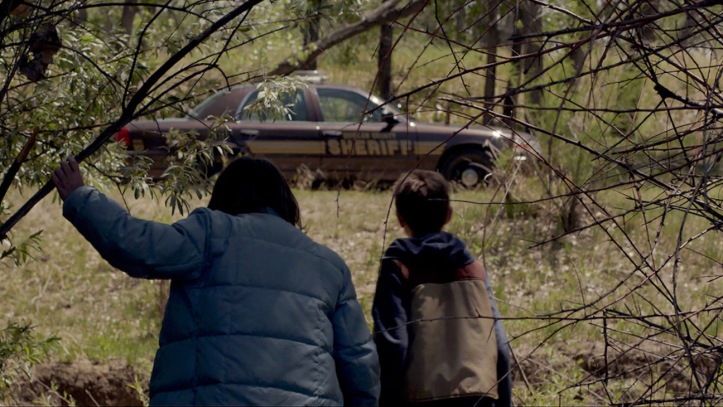 Bacon nails this role as he apparently emotes frenetic paranoia, panic and explosive unpredictability through-out his failed attempts to track the boys down. When he does, through the cop car’s CB radio, Bacon’s entire demeanor, voice and tenor completely darkens and he delves into a menacing otherworld where we never know what his performance will be capable of.

“Boys, I know you can hear me. You are in a whole lot of trouble.” See what I mean? Bacon delivers lines like that and totally owns the role.

The boys, panicked and freaking out, only continue to make even worse decisions while driving around. One moment made me really cringe, as the boys wave loaded guns around with absolutely no idea how to use them. More than once I had expected one of them to accidentally shoot the head off of the other. Yeah, the movie gets that tense and I almost couldn’t watch. But, if in your gut, you feel some foreshadowing in these moments then do trust your gut…

Camryn Manhiem also capably stars in “Cop Car” as a secondary plain Jane character named Bev, that sees the boys driving dangeroulsy and reports them to the local office which is Kretzer’s precinct. So, things continue to get more compliacted as Bev, Kretzer, the boys and Shea Whigham (Kong: Skull Island, Justified, Agent Carter) as “The Man” all meet up in the last act which is emotional, striking and quite electrifying in a very histrionic way. Watts continues to successfully let the film unfold with action and the dire situations, which started with the boys taking an unassuming walk outdoors, turn nasty and dire.

“Cop Car” is fun in a very warped way and Bacon’s Kretzer is a very intense baddie who we need only to provide the tether to how important the vehicle is to him, in this story. The stars are the boys, both of which are extremely relatable. They ponder big things, asks big questions, goof off, curse, pretend and argue. All while packing loaded guns and meat by products. They are just being boys and with Watts’ steady story, which knows how to unfold confidently, it plays out like a cautionary tale about youthful miscues and mis-judgements. It is a reality play on how innocence and corruption are two opposing lanes on this crazy highway of life.

“Cop Car” is a pretty solid gem of a crime picture that looks very nice and unfolds with the force of a blunt object. The pace is great, The music is effective and quite unique as it accentuates each small vignette that features the boys from more innocent moments to scenes of despair later on. The film definitely deserves a larger audience and has a very honest indie vibe that is Coen-esque in places. As a film that is flying low on the radar in some markets, it will come as a very good surprise because of the performance of Bacon, Watts’ un-complicated direction and the enthusiastic turns by Freedson-Jackson and Wellford. The perplexing ending, though not a true wrap up, re-enforces the fragile unpredictability of making bad, albeit seemingly innocent choices. In “Cop Car” that exploration is eye opening, truthful and relevant. 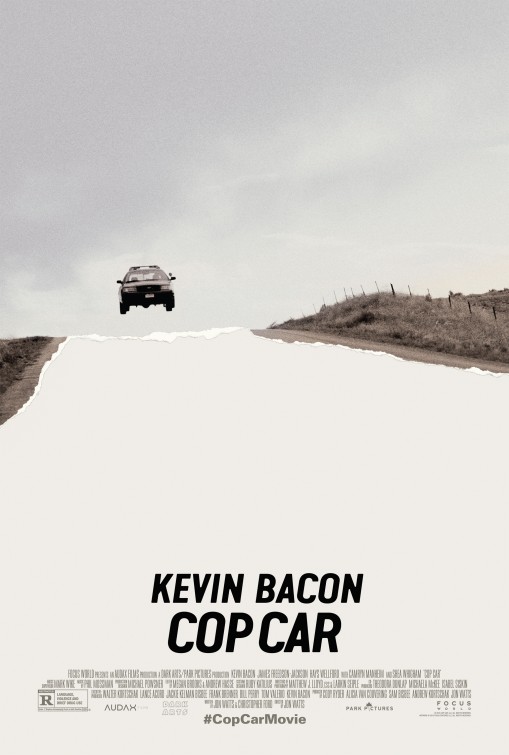 Note: Listen out for Kevin Bacon’s wife, Kyra Sedgwick as the Sheriff’s dispatcher. 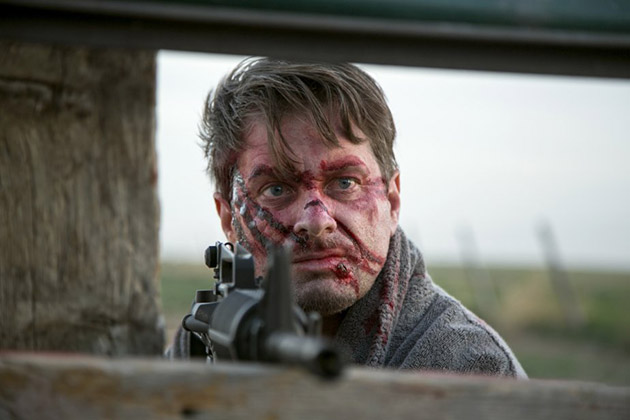