While Sheriff Brackett and Dr. Loomis hunt for Michael Myers, a traumatized Laurie is rushed to hospital, and the serial killer is not far behind her.

Director Rick Rosenthal lost the war before the battle even began. Critics and fans alike were incredibly pessimistic that a 2nd Halloween could ever come close to the level of suspense and terror that the first film successfully provided. Well, they were quite right, in my humble opinion. It’s not as good as Carpenter’s venerable and iconic “Halloween” but it’s pretty damn close. It’s a miracle this film is as good as it is, considering that director John Carpenter begrudgingly accepted to write and produce, with Debra Hill, but refused to direct the feature.

Carpenter even reached out to his friend Tommy Lee Wallace (Halloween III: Season of the Witch, It, Fright Night II) to direct and he politely declined. So, here comes first time director Rick Rosenthal to pick up the pieces to not only make a decent film, but a solid horror sequel, and Rosenthal succeeds brilliantly. There are two distinctive components to “Halloween II,” that make it apparently successful: A good script and wonderful cinematography by Dean Cundey. Writers John Carpenter and Debra Hill decided to start the film directly at the end of the first and have it take place on exactly the same night, on Halloween, in Haddonfield.

This was a brilliant and a decisively smart decision. That immediately linked it to the first “Halloween” and got the train moving without having to explain any back story. This is a classic case of “if you haven’t seen the first, don’t bother.” One of the criticisms leveled against “Halloween II,” over the years is how much bloodier and violent it is than the first. That is absolutely true and accurate. It is most certainly more violent but the blood is never over the top and the shots of gore never linger. Also, compared to your average “Saw” film, it’s incredibly tame. The main focus is on the suspense and it’s build up. With the shift in location changing from a normal suburban neighborhood to a small town hospital, where staff and patients are vulnerable, it still retains that creepy familiar feeling.

The hallways appear eerie and desolate. The darkness, surrounding every little corner seems to be hiding something evil, and the hand held camerawork is fantastic. Also, without giving anything away, the ending to “Halloween II” is extremely satisfying. I have always thought of “Halloween” and “Halloween II,” to be one complete three hour film that should have ended right there, at the end of the second entry. It wraps up the Laurie Strode, Michael Myers, and Dr. Loomis stories as well and tight as you can. If you’re in for an enjoyable and classic horror marathon, watch them back to back with the lights off. It’s a scary good time. Highly Recommended!

On the strength of a short film named “Toyer,” Carpenter and late Producer / Writer Debra Hill, decided on rookie Rick Rosenthal to helm the film.

Rosenthal has stated, in the past, that upping the blood and nudity was not his idea at all. It was due to Carpenter coming in, and making some changes, after a rough cut was too tame. Rosenthal feels that Carpenter (who had a strong post presence) damaged his cut, which he felt was fine the way it was paced.

The budget was 2.5 million on this movie. The first’s was only $320, 000.00. Yablans and Akkad both plunked down some serious coin for this entry.

Composer Alan Howarth (Star Trek: The Motion Picture), returns to co-score the film with Carpenter. Howarth has worked on various Carpenter films like “Escape from New York,” “Christine,” and the horror movie, “Prince of Darkness.”

The Theatrical and TV cuts of “Halloween II” are almost the same length. In the TV cut, we find out the real fate of the EMT, Jimmy, who earlier in the film, slips on a pool of blood.

In “Halloween II,” young actor, Ty Mitchell, plays a young boy who bites into an apple and gets a razor blade stuck in his mouth. He is then rushed to the hospital where Myers chases down Laurie. Ty Mitchell also played, Andy, the son of Adrienne Barbeau in Carpenter’s Pirate Ghost Story, “The Fog” (1980) 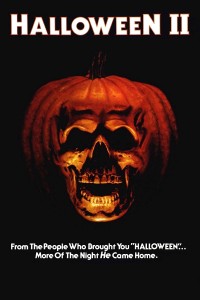 SNL alum, Dana Carvey makes a cameo as a cameraman.

John Carpenter and Debra Hill originally had planned to write the sequel with Myers tracking down Laurie Strode, a few years later, at a high rise apartment building.

Other horror films that year, including “Omen III: The Final Conflict” and “Friday the 13th” were bested by “Halloween II” at the box office.

In many circles, “Halloween II” is still considered a splatter film instead of a slasher. Also, many fans feel that the first 2 films, along with “Halloween: H20,” are the only true canon. Though, many adore the other sequels (Return and Revenge of Michael Myers) which also starred Donald Pleasence  along with a young Danielle Harris.

Over the years, “Halloween II” has gained more respect among horror fans and critics. Some initial criticisms remain quite stinging, though. Many do recognize the strengths of this sequel. Some have been known to change or re-review the film with a more favorable (if not glowing) outlook.

Director Rick Rosenthal returned to helm “Halloween: Resurrection” which was met with a very chilly response and is not as admired or respected as his other film, “Halloween II.” 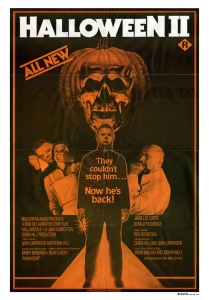 MANY THANKS TO WIKIPEDIA, FANGORIA AND FEARNET