The life of a time-traveling Temporal Agent. On his final assignment, he must pursue the one criminal that has eluded him throughout time.

Michael and Peter Spierig, who brought us “Daybreakers,” back in 2009, have presented to the sci-fi / drama community of film-goers an intelligent, earnest and very effective film in “Predestination.” It is a movie that has a million variables, since it deals with time travel, that trickiest of sci fi endeavors. But, at it’s core, the movie is very clear and very raw. It is a movie that will provoke debate, arguments and most assuredly some head scratching. I know, for sure, by the movie’s end, I was completely confused, confounded but thrilled by what I had just witnessed. Primarily because I knew that this wondrous little film definitely deserves a re-watch or 3, just to understand the sublime and submersive themes and romanticism.

Based on the story “All You Zombies,” by prolific science fiction author, Robert Heinlein (Starship Troopers) is an incredible mind screw of a movie that has no problem whatsoever forming the basis for all that occurs afterward with a simple little premise and set up, that at first seems a bit trite and hokey. This tale is so unlike the other types of stories by Heinlein, and even by the various types of time travel movies that try to be straight-forward and concise. No, “Predestination” is another animal all together. It makes you dig deep into your psyche and observe the Greek tragedy that unfolds visually before your eyes. The movie and story will, at times, test your patience but it will, without a doubt, make you think and open your mind. 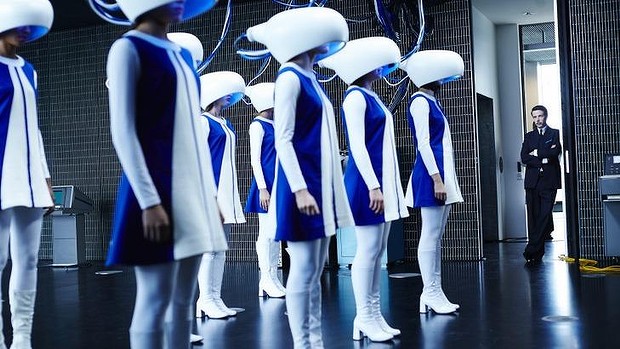 Now, there is very little in “Predestination,” in the way of starships, lasers, off planet battles and aliens taking over humans. It is almost the anti-thesis of all of that. Ethan Hawke (Daybreakers, Sinister) turns in a very low key and almost aloof performance as “The Bartender,” who is actually a sort of “Timecop” or “Time Fixer” who is in search of an elusive terrorist, who calls himself “The Fizzle Bomber.” Now, at this point, in the 1970’s, Hawke poses as a bartender to hunt down said bomber before he destroys all of New York City.

But, not before he is savagely burned (during a mission where he is overtaken) resulting in a long healing process where, along with repairing damaged vocals chords, had to endure a full facial graft as well. Since that, we never really assume that he looked and sounded different before the burns (we also never see his face in the prologue of the film) either. Like I said, many things will fall into place (well, some things) after the conclusion.

Now, to the meat of the story, while bartending, a young chain smoking individual (a magazine writer and columnist by trade) walks in and is challenged by Hawke (after first appearing a bit abrasive and angry) to tell him the best story he’s ever been told, since Hawke alludes to have “heard them all.” With a bottle of whiskey up at stake, the individual settles in with Hawke and tells a very strange tale indeed, for a while, over a game of billiards. What does follow are numerous flashbacks and a mystifying story that is so other-wordly, sometimes ridiculous and maybe even overly fantastical but within the creepy, unnerving and intriguing confines of the story, seems completely persuasive and probable.

This film, also written by The Spierig Brothers is a masterfully multi-layered film and it could be very easy to write a long and detailed piece on all of the nuances and narratives, and there are many to dissect here, but what is important is that the actors propel the movie into a whole other level with such moving turns. The beautiful Sarah Snook (Jessabelle) gives such a wholesome, determined, confident and eager performance alongside of Hawke.

She balances all of the ambitious and numerous demands the role has. (She is almost unrecognizable at times, favoring a very young Leonardo DiCaprio) She emotes and projects with such vivid composure that at times she is quite scary and also quite sad. It provokes us into entering her world and mind and Snook does it with such believe-ability, professionalism and skill.

The film, though, is so many things and exposes so many ideals and scenarios that it is just dizzying. The flashbacks, paradoxes, different time periods (50’s, 60’s and 70’s and even the near future, are all on display here), the violence and complexities astounds the viewer and kicks you into a thought provoking landscape. The production is clean, bright and dark, precise but sometimes appropriately ugly and loathsome.

Events that happen to the protagonists will undo and disgust some audiences who are looking for more rote antics. But, the movie never shies away and when confronted with the film’s transgender material, the movie stays true to form trying it’s best to open one’s mind by how the story is told and how it unfolds and connects in the end. This is a true strength for how The Spierig Brothers manage to balance it all.

“Predestination” is a good looking film despite the lo-fi approach of the story. The visuals, design, music and look of the movie is very top notch and with all of this being said, the story is what matters here. The very astute performance of Hawke, who can appear to play any part, very well, is astonishing to watch. Some may think he seems to be sleepwalking in the role, but I would rather like to think that he is a weary temporal officer, that may have much more to his past and his identity, than what appears on the surface. It is a role where the sublime and morose approach may seem the best fit. Hawke manages to pull it off.

But, please, watch this for Sarah Snook, if for no other reason. She is completely immersed in the performance. Her tale is the heart of the film and by it’s end and the worthy and trippy finale, you will be provoked into a myriad of emotions and feelings of confusion, empathy and repulsion, but these are the things that the movie sets out to be at it’s core. It will demand various viewings, just in order for the audience to grasp and dissect every little nook, subplot and crevice. The movie, surely, is a complicated and convoluted affair that can be demanding within that first watch but be patient, the movie has a killer twist and an elaborate wrap up that is quite cyclical, challenging and full of enough subtext to make Bergman proud.

Kudos to The Spierig Brothers for delivering a master stroke with “Predestination.” I could keep going on and on with this review and still would not begin to tap into all of the many facets of the human condition it explores. It is a film you may want to let sink in before the next re-watch. I can bet you that bottle of whiskey that you won’t see it the same way and come to the same conclusions the second time around.