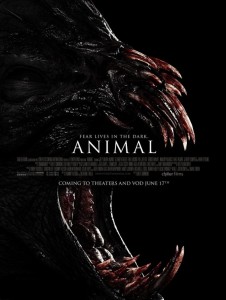 When plans for a weekend vacation hit a dead end, a group of close-knit friends find themselves stranded in unfamiliar territory,

“Animal,” from Chiller Films and Director / Editor Brett Simmons, who helmed the somewhat popular Husk and The Monkey’s Paw (Also from Chiller Films), blatantly begins his monster movie with the old John Carpenter stand by: White on black Albertus Typeface for the opening credits. (Even with a “Special Make Up FX and Creature Effects Designed Credit to Gary J. Tunnicliffe by way of Rob Bottin). He also just runs the title sequence with music playing in the background (supplied by the cool TomandAndy), supposedly to create some mood and tension. It is an endearing play that was also used to lesser effect, with the recent “Almost Human,” another recent monster flick running in the same vein.

It is quite flattering, since everyone wants to make their own version of “The Thing,” whether it be with aliens or goofy creatures hunting young people in the woods. Yeah, you read right. The Woods. And in a Cabin, even! So, that being said, I was pulled into “Animal” with caution, since the opening credits were very telling, in that Simmons is want to present a type of homage or wink in the direction of Carpenter and even Joe Dante, John Landis and Tobe Hooper. One is just not so sure of the final intent. Will the movie be a complete rip off or at least try to be something entirely different but maintain the respectability of a reverential effort? Who knows? Hmm…I wonder if it will snow tomorrow? Um, sorry…I got off track there a bit. 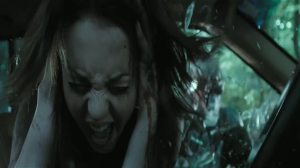 This film, which was executive produced by Drew Barrymore, starts right off with a frenetic night-time chase sequence in the woods. We have young people running for their lives from a ferocious and feral entity that catches up to one of them and dispatches her in a very violent and bloody manner. Then pops up: “Animal” (White on black again).

Thus begins the film, not terribly impressively, I must add. Simmons introduces us to archtypes right away, with another batch of kids driving towards a densely wooded area for a weekend hike and stay at a family cabin belonging to the sibling of the group. The caricatures just about pummel you in the face. The studly dude, the bitchy chick with huge breasts, the meek and level-headed girl, the gay guy and the baseball cap wearing hipster.

Elizabeth Gillies, from White Collar, as Mandy, immediately overshadows her acting peers with just the right amount of B movie intensity, as where the other actors are sketchy at best. As they walk on through the woods, to their destination, Simmons subjects us to forgettable and banal banter between them all. Before the action begins, we end up finding out the siblings argue a lot, a couple has issues to work out, the loner geek is mis-understood about his sexuality and likes to always joke around, yadda yadda yadda. Blessedly, using reveals and some isolationist tactics, Simmons quickly proceeds to the good stuff. Finally, it is deep night and the group are still not at the cabin, when they begin to hear strange noises and experience what appears to be remains left behind from a fresh kill. 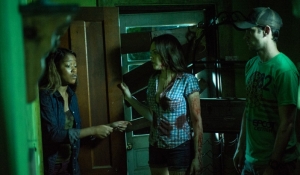 Then the action is amped up when one of the hikers flashes a light on what they all thought was a animal feeding. Well, it isn’t. It is some loud, bald, ravenous and angrywhatchamacallit that starts to chase them down and devour them. The manly dude is struck down and mauled ala An American Werewolf in London. I mean torn apart into meat loaf kind of mauled. The group encounter a couple in a cabin (they claim to have had car trouble and wandered to the cabin), as they try to escape the creature. And Mandy is injured in the attack.

Soap Opera actor Thorsten Kaye plays Carl and Amaury Nolasco is Douglas, seen in the prologue of the film. They go on about the creature’s hunting and eating habits as the rest sit around fearing the worst. Carl seems to the be one charcacter that isn’t totally bananas like Douglas, and seems to know the beast pretty well. They all try to make a plan to escape and elude the monster while occasionally trying to understand what it is. Meanwhile, Douglas seems to be shut away from the rest and appears to know more than he’s letting on.

What follows is hokey but passable monster mayhem. The movie is a modest enough effort with the intermitent scare and jump while the crew is holed up in the Cabin. I give Simmons ample credit for keeping the movie moving at a cool pace and for channeling the “people stuck inside with the monster outside” trope used by so many other directors before him. I ‘m pretty sure he and his writers (supplying some really eye rolling dialog) and crew knew they weren’t setting out to make another “Night of the Living Dead.” 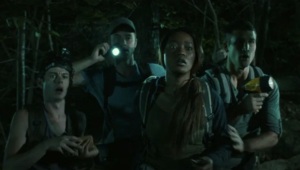 Another surprising element, one that may work in it’s favor for some, is that the gore and splatter are kept to an agreeable minimum. The monster, unfortunately, doesn’t fare as well. I kept looking for a zipper or wire rods holding up it’s claws. Simmons makes the booboo of showing the creature way more than he should (it looks even less impressive in the daylight) of but at least those large predatory teeth looked quite formidable. Much to the credit of Mr Tunnicliffe.

I won’t go into the subplot (there isn’t much of one), or let loose any spoilers for “Animal.” I will let you all just experience it first hand one rainy Saturday night when you have exhausted all other creature features for the night. “Animal” sports nice photography, warm color and so so turns by all the actors involved. (Keke Palmer, of Grey’s Anatomy, is actually not too bad here, either) “Animal” is in no way inventive, pretty routine and not that original but as a kind of mid level monster romp, it is at least efficient, if supremely corny and predictable (There is even a “dude too close to the boarded window rambling on” scene. I kid you not). Towards the finale, there are two shock moments back to back. One was effective, the other really not.

But for something quick to digest before better horror movies to watch, the movie ain’t that terrible. It is a true and true B movie junk with just about every convention thown in except for the kitchen sink. It may work for some as a quick fix but I am confident in saying not too many. It’s like that delightful sugar rush you get when you eat a Snickers bar, right before you abysmally crash. Oh and please, God, consider this as a rental before you buy. 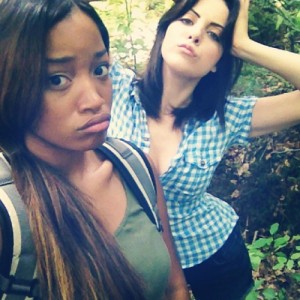