The Town That Dreaded Sundown

The Town That Dreaded Sundown from Director Alfonso Gomez-Rejon (American Horror Story), is an un-apologetic, fierce and retro horror reboot/sequel with a very keen sense of technical prowess, fun, scares and strong reverence. There may be the question whether or not the film is a reboot or actual sequel, in the minds of most genre fans, but I think it’s a moot point, for sure. What ever the movie is, a docu-like horror film or not, it is a 90 minute rush of reliable but fitting cliches and appropiate chills and thrills with a strong 70’s vibe, to boot.

The movie, which takes place 65 years after the original “Phantom” killings (or otherwise known as the “Moonlight Muders”), in rural Texarkana, has a unique veneration for the original film (Directed by Charles B. Pierce, who also gave us the classic cult film: “The Legend of Boggy Creek”) while maintaining a certain esteem for genre tropes, which gladly work in it’s favor. Gomez-Rejon’s film, is an amped up, but stylish, slasher that brutally hits the mark on more than one occasion. And here, if one is sqeamish, you may want to watch a Disney movie instead. Which is to say, plainly, Gomez-Rejon pulls no punches.

To me, what made this new version of “TTTDS” quite enjoyable, aside from it’s devotion to the first, is it’s sense of dread, playful pathos and exclusive homage to films before it. The universe that the story of this film inhabits is one of smoky atmosphere, languid small town goings on and especially one of spooky gruesome-ness. Gomez-Rejon also manages to actually pull off a feat, that most horror picture directors drop the ball on, and that is to make us care about the main protagonists of the movie.

And Gomez-Rejon supplies us with a bevy of different types of eccentric personalities and vibrant characters to watch. A who’s who, or more like a rogue’s gallery of hokey and stereotypical people that are always fun to explore, watch and judge.

65 years after the infamous murders, and co-incidentally during a annual screening of Pierce’s first film in a make-shift outdoor drive in, an uncomfortable young teenaged girl named Jami (Addison Timlin) lets her boyfriend know that the film is disturbing her. Right out of the gate, Gomez-Rejon adds a layer of dread and unease as the town watches the grisly film while a local Pastor, played by vet actor Edward Herrmann, hands out pamplets about the “wicked-ness” of the movie being screened.

When Jami and her boyfriend drive off to find a desolate place to hang out quietly, Gomez-Rejon’s film quickly re-introduces the horror of “The Phantom” with Jami barely making it out alive from the terrifying attack, that leaves her boyfriend butchered. Then, the movie becomes a paranoid work in small town police investigations, suspicions and local fear and color.

The actors that give very capable and interesting performaces in the film include no other than vet actors Ed Lauter (CUJO) and Gary Cole (Office Space) and in a very re-freshing and surprising turn, Anthony Anderson (Scream 4) as a Marshall who prefers to be called “Lone Wolf” Morales. And to be sure, I can confidently say that Anderson manages to single-handedly steal every scene he is in. And despite his jovial and cuddly qualities, Lone Wolf is all business and wants the killer found promptly. He even asks for a copy of the first film to watch and apparently, in one scene, gets a bit squemish from the murders in the film.

Meanwhile, Jami presses on, struggling to move past what has happened to her and the recent rash of ferocious and inhuman carnage. Of note here, is Timlin who gives, easily, the best performance, adding vulnerability and fortitude at the same time, to Jami.

The wonderful Actress Veronica Cartwright (Alien, The Invasion, The Birds, The X Files) portrays her Grandmother and she earnestly adds a respectable air of seniority, class and humilty to the film as the only grounded, loving and centered adult in Jami’s life. She also meets up with a young, shy but charming research student named Nick, played by Travis Tope, who she eventually starts to have feelings for.

Good slashers are hard to come by and if you measure the the validity of a good one by it having a creepy vibe, strong characters, gory kills, chases and mood, then TTTDS has all of these things to spare and will not leave you disappointed. What is impressive, through-out is Gomez-Rejon’s visual flair.

There are Smoky, foggy rooms, diopter shots, intersting editing, fluid photography and composition that would make Dean Cundey grin, as well as footage from the original film inter-spliced with the present picture. All of this is paired up with Aguirre-Sacasa’s (The Stand) penchant for snappy and honest dialog, along with the history of the murders and the dynamics of the third act, when all is revealed. 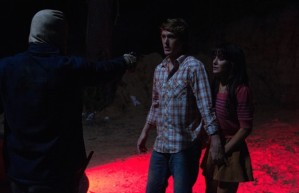 Even though the twisty ending is well executed, it manages to under-whelm a bit and provokes a bit of disappointment in regards to the revelation. It just didn’t pack that extra oomph! I was waiting for. But when the film clocks in at just under 90 minutes, it is hard to really dig deep for a meaningful ending to cap the proceedings. Then again, I may be making excuses for the writer.

By the time all of the carnage and action is wrapped up and the characters have completed their arcs, we have been witness to a nifty horror flick with a like-able cast, a merciless killer (you may never look at a trombone the same way again), colorful local people and a chic ocular style. The homages are all there which includes a sub-plot with one of the last victims of the original murders falling into shadowy obscurity.

This little bit of background further enhances the mood and of course, the adulation of the first film, by allowing the very versatile Denis O’Hare (American Horror Story) to shine a bit as Charles B. Pierce Jr. Much is made of his theory of who the killer may be and it all does make a kind of kooky and conspiratorial sense in the end.

There is much to this film that we have seen before and it is not, in any way, re-inventing the wheel. It will not be to everyone’s taste and lovers of the first cult classic will either be very flattered or downright insulted at the prospect of a reboot/sequel interfering with the mythos of the “Moonlight Murders” (The movie even has a strange “Helter Skelter” vibe whenever we are taken back in time to the unpredictable and scary days of the first rash of murders).

But, to this I say: Hang in there. The movie is not very long (about 90 minutes) and it clips by at a breakneck speed once things heat up. Some may feel the story is a bit lethargic but I enjoyed it as a slow burn. There are, of course, some obligatory cliches and some predictable mis-information and psych-outs but it is all reverential and feels forthright and equitable in all honesty.

For a quick slasher that manages to genuinely mesh old school horror tactics with a rural historical thriller, then “The Town That Dreaded Sundown” is definitely worth a look. Gomez-Rejon manages to retain a certain pallette, aura and a terrifying glamour to it all which is refreshing. The strong cast and general wackiness of the characters balance the terror and dread with impressive complexity.

Also, I would like to state, that one does not need to watch the first film in order to understand the remake and what transpires within the given timelines. The movie gets into the history well enough on it’s own. But, if you can get your hands on a copy, then it definitely wouldn’t hurt to sit down and educate yourself on how the whole thing first started.

The Town That Dreaded Sundown is currently available on NETFLIX for High Definition Streaming. Enjoy!