Hi gang, Vic  here to introduce the latest Contribution for Vic’s Movie’s Den. It is from Eric Jones of “Deacon’s Den.” Eric has kindly written up a very cool post about the Best Animated Shows that he feels you all should be watching and enjoying. I can confidently say that the list is very accurate and pretty varied. I hope you all find one show or more that may interest you!

We really are in a “Golden Age of Television.” The quality of various programs on the air now is something we haven’t seen before. One thing that people seem to overlook however are some equally quality animated series. I think the problem that most people have is when discussing programs of this nature is the mere fact that they are animated and thus will  dismiss it simply as a “cartoon.”

Animation simply is a method one tells a story with, it is not a genre. Great animated films such a The Lion King, Beauty and the Beast and Aladdin are examples of this. Not cartoons, just animated films. This is why I wish to present you with some quality example of animated series that are just as engaging, thought-provoking and entertaining as any live action series.

Before I begin however I wish to just let it be known that Avatar: The Last Airbender and The Legend of Korra will not be on this list, it’s not that I don’t think they are good series. I have heard amazing hints about both. I just never watched either that often to generate an opinion on them. Perhaps later I’ll check them both out and revisit this. Please don’t hate me.

The Participants (No Particular Order):

Airing in the 1990’s after the release of Tim Burton’s classic film, this was the television Batman I grew up with. It was amazing to see this serious show about the Dark Knight but airing on weekday afternoons and Saturday mornings. I’ll never forget my reactions to seeing the battles Batman faced with his rouges gallery, from the creation of Clayface to witnessing the psychological breakdown of Harvey Dent as he becomes Two-Face. This show is probably the most accurate screen depiction of Batman. And as you watch it in 2014, it still holds up very well and will excite young fans and old.

I can’t tote on this show enough. A prime case of gone too soon, this adaptation of Marvel’s web-slinger is at least to me, better than all his cinematic outings. The animation style looks very childish at first glance so one may think it’s too “kiddy” but trust me there is more there. Not only to you get a great deal of superhero action, but great character interactions as Peter Parker deals with his high school life as well. It’s these interactions that I find more intriguing than when he swings around New York as Spider-Man.

Running for 5 seasons on Cartoon Network and its final season on Netflix, this computer animated series focuses on the campaigns of the Clone Wars which began in Attack of the Clones and concluded with Revenge of the Sith. Although we have familiar faces such as Obi-Wan, Anakin and Yoda, we get to focus on other characters handling different mission during the war.

Supporting characters such as Commanders Rex and Cody give is insight to the troopers and show us that they are not just clones but individuals. We are also introduced to Ahsoka Tano who is Anakin’s apprentice and actually gets character development far beyond what he master gets in the prequel trilogy.

The original Thundercats show will always be special to me. It was my favorite show growing up. However when you watch it now it is clearly a show of the 80s and as much as early episodes don’t hold up, later episodes really don’t hold up. To introduce the characters to a new generation, they were reinvented in 2011.

In place of the pretty static characters of the original we have some cool dynamics for the main cast. Lion-O is a young prince thrusted in to leading. Tygra his adopted brother who resents losing the throne. Cheetara we discover looks for a place of belonging. And Panthro dealing with betrayal. Another example of gone too soon. I would have loved for this show to get another season. 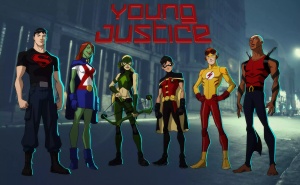 Much like Spectacular Spider-Man, this series focuses on a team of young superheroes rather than an individual. This show like a fair amount of other good animated series was cancelled too soon. But what we got was a very mature storyline and great interaction between the team members.

These are characters with personality not just superpowers and not even all of them have powers which adds to the dynamics even more. The superb animation gives weight to the action that we see on screen and gives us that comic book feel which is still important in series like this.

So there you have it. 5 Animated Series I would recommend to anyone. I would say check these out even if you have no fan loyalty to any of the characters or brands. These are great shows regardless of how it is told. Live Action or animated. If you have any suggestions please let me know. I would love to hear them!

Many Thanks, Eric, for taking the time to help out with another amazing contribution!

ENJOY THE CLIPS BELOW!