Nora Clark is a children’s book writer whose life is at a crossroads. After moving back into the house she inherited from her grandmother, Nora comes to grips with the traumatic memories from her childhood.

Director William Dickerson (Detour, The Mirror) opens his latest film with a subtle and uncomplicated title opening sequence. The classic white on black. He then immediately establishes an abrupt mood and uses a wooden stick-house prop and a young girl playing in the woods, to propel obscurity and mystification right out of the frame.

Before the Title is flashed we get a close up of a small girl’s eye through an opening of said stick house. With this, Dickerson already reels you in with solemn music, fluid photography and starts a perplexing mystery with his latest movie, “Don’t Look Back.”

Lucy Griffiths (True Blood, Robin Hood, The Numbers Station) plays Nora Clark, a successful children’s book author. As she confides in her therapist, played by the wonderful Kate Burton (Big Trouble in Little China and Grimm), she is brought back to her early childhood memories. Nora and Dr. Barnes (Burton) discuss the recent inheritance that nora was left from her deceased Grandmother, a large home with a past that Nora must now come to grips with. 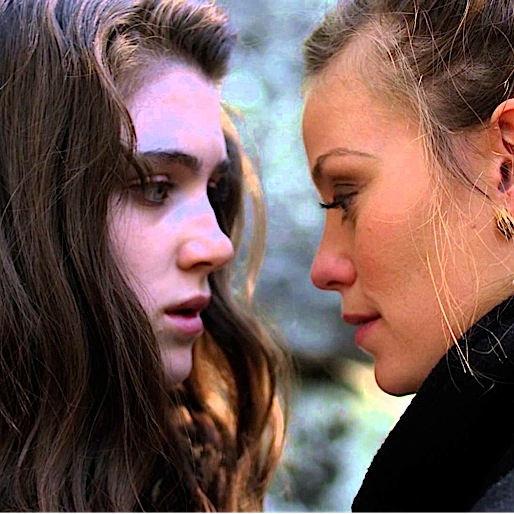 Feeling urged to go back to the home to write, Nora tells her therapist that she feels the house wants her to return. Once she arrives at the home, she sets up her desk and begins to write on her laptop. But, it doesn’t take long before she appears to have a bit of writer’s block and shuts down her computer. She then begins to roam about the house. As she begins to get comfortable in the old digs, she has her reverie interrupted by someone looking to enter her abode.

Actress Cassidy Freeman (Smallville, Longmire) plays Peyton Lake, who is Named after Bears Football player, Walton Payton, we soon find out. Peyton is an alluring, beautiful young woman and photographer, seeking a room for rent at Nora’s home. but she arrives at the wrong house for some curious reason that Is not immediately made clear.

Nora also re-connects with an old friend named Jack Tresler (Tyler Jacob Moore of Criminal Minds and Revenge) who has become a Trooper and “Looks official these days” according to Nora. The moment is awkward at first but Nora agrees to have some coffee with him sometime. As Nora sits and struggles to write (“Veronica Goes to Mars” being a very witty title for her Tome), she decides to head into town.

Nora learns the hard way, eventually, that her memories are hard to reconcile, as she goes through the motions in town and back at her home. Another old friend, Kelly, a persistent real estate agent (and “Nemesis), shows up and provides compliments that Nora seems uncomfortable accepting. Dickerson shows us her vulnerability very easily as Griffiths handles the dynamics well.

Dickerson and writers Michael Testa and Dwight Moody (who also worked on Dickerson’s enjoyable “Detour”), smartly secure and constitute dread, aversion and trepidation through the eccentric characters that are introduced into the story.

It is an effective feat on their part. Nora’s character is of one woman on the outside looking in. A woman who has returned home and needs to exorcise her demons there. Eventually, At Nora’s behest, Peyton moves in with her, And fancies herself Nora’s new muse and inspiration. Interwoven in all of this are some arresting images that Dickerson implements as a result of Nora’s dream state and he gives us just a little bit at a time In tried and true fashion.

Then, as a very pleasant surprise, Dickerson unleashes the incredible Roddy Piper as Nora’s grandmother’s old flame, Eddie Stark. Piper (They Live) has that indelible gleam in his eye and every line etched in his face tells a story. He turns in a strong, amicable but low key performance the benefits the pace and theme of the story well. all in all Dickerson puts his impressive cast to great use in his film.

But at about the half hour point in the movie, things take a funky turn towards the bizarre when Peyton confronts Kelly in the grocery store and threatens her with bodily harm while accusing her of being cliché and using tropes to badger Nora into selling her home.

Dickerson and Moody ratch up the tension in a very capable and Hitchcockian manner. There is enough fear through-out the movie with some well placed jumps to boot. But “Don’t Look Back” is about the psychological effects and never turns into a self deprecating horror affair.

Dickerson’s film disentagles and uncoils scarily as we become privy to what lies beneath the free spirit exterior of Peyton and in one glaring and useful sequence, Dickerson uses the actresses during an outside photo shoot to act off each-other in a disturbing but profound manner (the photography and mirror motif is a very useful tool in the movie).

Using his supporting cast, like Burton and Piper (who steals every scene he is in), as well as un-gimmicky abtrusness, Dickerson achieves a kind of cinematic puzzle. All the pieces and clues are there and if not caught or intercepted the first time you may find yourself wanting to go back and piece it all together again. Kudos to Dickerson and Moody for making it work with a small budget and admirable ambition.

Nora and Jack get close (jack is forced to investigate a crime involving Kelly while we get a creepy glance from Cassidy) and Peyton continues to act very strange. As the film progresses, some may feel as if in familiar territory and many may see the ending telegraphed a bit but it is never distracting or cliché.

It is rather boldly told and when we witness the fate of Peyton, Nora, Eddie and Jack we can conclude that everyone involved in the movie has spun a creepy and independent yarn with all of the colorful characters. 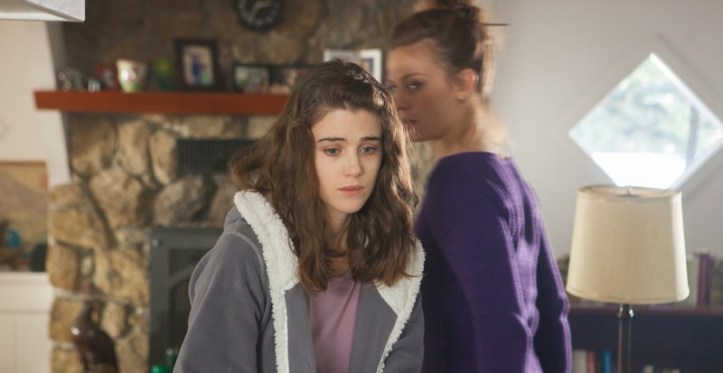 With graceful photography, chilling music and bravura performances from the female leads, “Don’t Look Back” is a breezy, engaging thriller that, despite having a short running time, is worth a watch for it’s suspenseful pallette and slick character twists. It comes full circle as Nora eventually confronts those demons and while coming out on the other end, is a victim of her own strange catharsis.

But in a telling and well placed moment at the end we watch a very warm exchange between a young and troubled Nora and the person who would go on to become her guardian angel…or devil.

“Don’t Look Back” from Director William Dickerson comes very recommended and you can currently catch the film on these platforms: