Hi everyone! Vic here with an older and recently touched up review from a ways back. I will be occasionally going through some older posts and reviews and fixing them up and adding more content to them. I.E. – New pics and new text in the review itself. Hope you enjoy them and here is the first re-vamped review from The Den!

In San Francisco, a group of people discover the human race is being replaced one by one, with clones devoid of emotion.

“Invasion of the Body Snatchers”

“I keep seeing these people, all recognizing each other. Something is passing between them all, some secret. It’s a conspiracy, I know it.” – Elizabeth

“My wife sick. She wrong. That not my wife. Different. That NOT my wife.” – Mr. Tong

Released in 1978, Philip Kaufman’s (Rising Sun, The Right Stuff) moody and chilling sci-fi / paranoia film, “Invasion of the Body Snatchers,” is the first of three remakes of “Body Snatchers” films based on Author Jack Finney’s seminal novel. The novel was first released in 1955 (after being serialized in Colliers) and while not completely critically popular, it was a thrilling story ripe for film adaptation. The first being from director Don Siegel in 1956. This first adaptation remains the most recognizable and probably most coveted as a true sci fi film full of symbolism and metaphor. But Kaufman’s film, while remaining timely and current, gives Siegel’s movie a run for it’s money.

What is both unique and unusual about Kaufman’s film, if one were to see it today for the first time, is that it is a remake from the 1970’s. Back when remakes were a rare entity, the film completely succeeds in being singularly provoking and a total creep-fest. Something that is established right away with the deft direction from Kaufman.

It stars Donald Sutherland (Salem’s Lot, Don’t Look Now), not as a trusted and stoic hometown general practitioner, like Kevin McCarthy, in Siegel’s movie but as a Public Health Officer in San Francisco, named Matthew Bennell. (The story is moved from a small town to a big city which is immediately interesting) After a strong and suspenseful build up, Matthew, is pulled into an “aliens among us” as plant pods plot. His associate and best friend played admirably and believably by the talented Brooke Adams (The Dead Zone) is actually married to one of the very first creepy victims of the pod people from outer space.

She in turn has a tough time making Matthew believe what is going on. She tells Matthew that her husband is not her husband anymore, prompting Matthew to think she is stressed and needs psychiatric help (but we know better) and at one point he has her seeing a shrink named David Kibner, played wonderfully with that wink of the eye glamour by Star Trek’s Leonard Nimoy, in one of his few meaty non-“Spock” roles.

Kaufman deftly adds and layers mood, instability and a chilling representation of community neurosis and delusion (or perhaps contagious insanity?). As well as, the accurate zeitgeist of the 1970’s, paranoia and even (with some well placed nudity) some good old fashioned chase sequences. Which turns the film into a fun, edge of your seat sci fi thriller. Jeff Goldblum (The Fly) and Veronica Cartwright (Alien, The X Files, The Birds) round out the cast as a frantic couple, named the Bellicecs’ who get wrapped up in the “aliens are taking over us” conspiracy.

Kaufman extracts just the right hysteria from all of his actors without ever going over the edge into histrionics and never revealing too much at a single time. Scene after scene, with the dynamic and darkly sinister camera-work from DP Michael Chapman (Raging Bull), Kaufman ever so slowly peels back layer upon layer revealing uncertain and mystifying circumstances. The film gradually builds so much tension, (using the eerie score and shadowy tilted angles) as we, along with the frenzied and afraid characters, begin to unravel the truth about the true intent of the pod aliens.

Kaufman manages to intertwine and weave in some very eccentric and strange moments: Strangers on the street all behaving eerily entranced, persons exchanging spine chilling glances, all behaving as if in a hive mind. In one terrifying moment, an older man (played by original IOTBS star Kevin McCarthy in a well placed cameo), approaches Matthew and Elizabeth screaming and pounding on their vehicle, trying to warn them. What follows is one of the movie’s most incredibly blood curdling and alarming series of shots.

Through-out the movie, Kaufman does not waste any scenes or shots. Each effective shot is important and telling. There is usually something relevant and significant to the story or characters in the frame. And when you think you are watching something mundane, like a man buffing a floor, people languidly staring outside of windows or even a priest (played by Robert Duvall in a cool little cameo) watching a school trip on a swing, think again. Everything means something in this film.

I could go on and on about how many very creepy scenes that Kaufman manages to squeeze into the movie. Especially one gripping moment in a dry cleaners store with an exchange between Matthew and the store’s owner. Some scenes do include some lighthearted looks into the mundane everyday life in San Francisco (mud baths anyone?) and it’s citizens but Kaufman even disrupts those with tension and doubt.

In particular, inside the mud bath business run by the Bellicec’s, the normal running of the baths is interrupted by a strange customer reading “Worlds in Collision” by Velikovsky. It is scenes like these that makes Kaufman’s film a must see for the subtle hints, glances and insight into what make a film like this tick and eventually work. Those scenes, though, are fleeting then we get back to the very intense undercurrent of fear and impending dread and finality that screenwriter W.D. Richter successfully accomplishes. It is the payoff that is a resounding and spooky success. It is not a tidy wrapped up affair like the original and will definitely leave one gasping and shivering in fright.

The film works as a cautionary parable but it is more than that. It is the sum of the fears, doubts and suspicions that the viewer brings into it. Kaufman knows what scares us and he uses the fear we all have of not being in control or say, not being who we are, and he uses it well. Cinematically the film is the visual counterpart to one having a nervous breakdown and fearing the assimilation of one’s self. The fear of losing our humanity to sinister and amorphous villains.

I may even go as far as to say it plays out as some sort of strange pre-cursor to the many stories done so well in “The X-Files.” Definitely do not watch this one alone and make sure that the doors and windows are locked when you view this one and most importantly…don’t fall asleep!  Keep an eye out for the original’s director, Don Siegel in a cameo as a cabbie. Highly recommended! 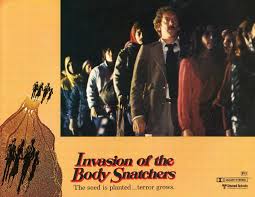