An affable underachiever finds out he’s fathered 533 children through anonymous donations to a fertility clinic 20 years ago. Now he must decide whether or not to come forward when 142 of them file a lawsuit to reveal his identity.

“Delivery Man,” from director Ken Scott, is practically a play by play remake of the French Canadian film called “Starbuck,” which was released in 2011. Vince Vaughn (Psycho, The Lost World) stars as fresh meat delivery guy, David Wozniak (aka “Starbuck), who has donated sperm to a Fertility Clinic over a course of several years to help pay off his mob debts, is the typical Apatow-esque man child. He’s immature, monetarily irresponsible, sometimes goofy and an “affable underachiever.”  A role right up Vaughn’s alley.

To start things off we get a pretty by the numbers first act with the set up and insight into David’s romantic, social, familial and work woes. He has a lawyer / best friend, who delivers some funny moments, named Brett (Chris Pratt of “Her”) who himself has a big family full of several children (who also hand over some light moments). David works for his Dad and alongside his brother, Alesky (Bobby Moynihan), at the meat plant (Bobby Moynihan), who always seem to have his best interests at heart but can never get him to be responsible for himself. Then there is David’s on and off again girlfriend Emma, played by the very pretty Cobie Smulders (The Avengers, Captain America: The Winter Soldier), who drops a bombshell on David announcing that she is pregnant. Smulders provides a nice performance here, which enables her to anchor and ground Vaughn.

When 142 of the nearly 500 children he sired with his sperm, sue David for disclosure, things get very interesting and the film undergoes a significant tonal shift which makes the movie a heartwarming and schmaltzy little comedy that aspires to be nothing really significant and over-reaching. It’s safe to say that while being a bit clunky on the actual comedy it seems like Scott is trying for a sort of dramatic social message about the importance and acceptance of family. In this respect, the movie is ok but if you expect anything else along the lines of big belly laughs (outside of characters acting goofy and incompetent) then look elsewhere.

David receives a packet of profiles of the 142 children that wish to seek “Starbuck” out and he eventually, against Brett’s consul, starts to pull them out one by one and seek them out individually. Meanwhile, Starbuck has become sort of a celebrity in the media for not coming forth. Here, Scott explores David’s resolve and character as he struggles with trying to get to know the kids and staying anonymous. One kid, however, named Viggo (Adam Chandler Berat) discovers the truth and ends up extorting David for room and board. Viggo, desperate for a father figure, tries to get to know David even though they have nothing in common. Viggo being the intellectual and David the layman. The basketball scene between the two is actually quite funny.

So, David seeks out the kids and they run the gamut. The musician, the professional basketball player, the artist, the struggling drug addict, the gay child, the mentally challenged child (Ryan, played by Sebastien Rene from the film “Starbuck,” who with Vaughn, supply some of the most touching moments in the film) and the struggling actor among so many others. Scott and Vaughn carry the movie with the supporting cast all doing their best to maintain the comedy but Scott insists on delivering a disparate universe switching between the maudlin and the whimsical.

Vaughn capably sticks to the quick talking, irreverent and self depracating schtick he is good at but the movie is simply over burdened with trying to provoke one to shed tears or reach over and hug their children. I suppose it isn’t a bad tactic but it gets old pretty fast and it comes across as a sort of Lifetime Channel movie trying to push our buttons.

Now, I wasn’t totally cold to it. It did have some genuinely warm moments that wre nicely done. Like David’s trips to see his son Ryan and the way he struggles to help his daughter kick her drug habit. There is much unfolding in “Delivery Man” that can be done better in future movies with less string pulling and more character development. The film is capable and isn’t performing brain surgery. It has some light moments that are cutesy and cuddly and some engaing moments of realism (David’s attendance to the Starbuck group is a nice touch) that keep it from jumping off the rails.

“Delivery Man” is not going to be everyone’s cup of tea. Most will probably walk away from this one cold and confused regarding their expectations but Scott’s film barely keeps it’s head above water with the likeable Vaughn and some nice on screen dynamics and interaction from the actors playing Starbuck’s children. A decent and light comedy that never really soars but provides some chuckles and some cool emotional charm, this movie is all right for a one time grab and go. 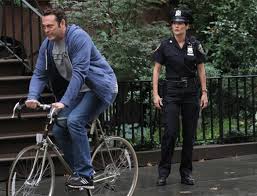