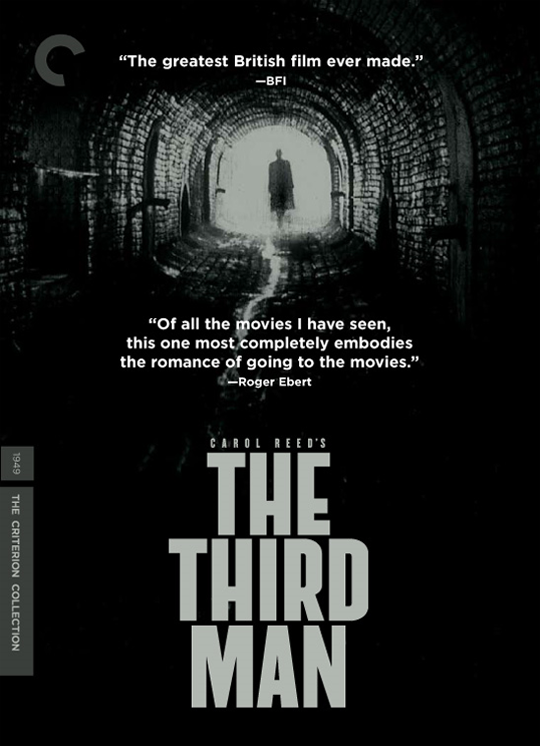 “Is that what you say to people after death? Goodness, that’s awkward?”

“In Italy for 30 years under the Borgies they had warfare, terror, murder, and bloodshed, but they produced Michelangelo, Leonardo da Vinci, and the Renaissance. In Switzerland they had brotherly love – they had 500 years of democracy and peace, and what did that produce? The cuckoo clock.”

Carol Reed’s (Oliver! and The Agony and the Ecstasy) “The Third Man” (produced by David O. Selznick) is just about as perfect a noir film that you could ever hope to get. It is an amazing feat in both storytelling, direction, photography and mood. It is a thought provoking, flawless and atmospheric tale of murder, deceit and conceit. Reed’s film boasts a precise story that explores themes and styles in regards to social acceptance, post war angst and deception with a fantastic eye for detail and story. Reed also weaves in political and social commentary with the profound dialogue that is all through out this movie. Especially in the form of the erudite and literate Mr. Harry Lime, played by the iconic actor and director Orson Welles (Citizen Kane, Moby Dick).

Reed’s film, written by Graham Greene (Brighton Rock) introduces us to Lime, currently living in post war Vienna, who extends an invitation to his close friend and ex-school buddy, Holly Martins. Martins is played brilliantly by Joseph Cotten (Shadow of a Doubt) who once again teams up successfully with Welles. Martins is a writer of small pulp fiction novels and is seeking to re-invent himself and when Lime asks him to come to Vienna it is to help Martins with his career with a job.

Unbeknownst to Martins (who does not know what he is getting into), Lime has a reputation that precedes him. One that is not so admirable and clean. Greene, Reed and Welles all strive to make Lime an almost larger than life man that on the outside is quite charismatic, charming and studious. But with the nuances put forth by Welles, we get a peek into what lies beneath those exteriors. Lime is a brilliant sociopath that deals in the black market in the supplies deprived Vienna. He is of questionable character indeed.

Lime is a beast of mythic proportions and when Martins makes his way to Vienna we become embroiled in a mystery that involves Lime himself. Upon arriving, Martins discovers that his old friend, Lime has been killed in an apparent car accident. To add insult to injury, Lime is accused of participating in some unsavory business. This in turn puts Martins in the path of the authorities as he tries desperately to clear his friend’s good name and investigate further. Reed’s film is truly ahead of it’s time. Made during the Studios Years in Hollywood, “The Third Man” defies all conventions with the immaculate story that is a true noir gem. It is also a journey. Not only for Martins but for the viewer as well.

Screenwriter Greene handles the plot with precision and the twists (some may see them coming) are exciting and high brow. “The Third Man” has enough intrigue for 3 films as Reed’s cast, including Trevor Howard, Bernard Lee (who played Q, in the Bond films) and as the alluring Anna, played by the beautifully sexy Valli (Passione), creates a very enigmatic world for the audience.

But it is Welles and Cotten’s show, here. With such a short amount of screen time, Welles dominates this movie (there are rumors that Welles wrote all of Lime’s dialogue but he actually wrote only 2 separate lines). Every scene he is in is never wasted and we get small glimpses into Lime’s mentality and his convictions that is so ahead of the curve in universal noir movie making.

Cotten is incredibly capable, diverse and cultivated in the role of Holly Martins but as such, he also is passionate and determined. One of, if not the best performance Cotten has ever given. Rightly so, Reed uses the locales and backdrops of Vienna to full effect in “The Third Man.” His Director of Photography, the under-rated Australian, Robert Kraker does an astounding job with shadows, details and depth that is wildly transcending.

His shots of  of a bombed out Vienna alone are worthy of discussion and praise on so many levels. Krasker is also responsible for such films as “El Cid” and Renato Castellani’s “Romeo and Juliet” from 1954. His coverage of the sewers of Vienna have also become legend despite Welles actually trying to avoid shooting in them at one point. Apparently, Reed had to shoot scenes around Welles, since he was MIA and running loose around Europe at the time. Alexander Korda, the production designer, as a response to this, constructed sewer sets back in the UK for filming.

One must not forget the music as well. Supplied by “Mr Cinderella,” Anton Karas. His zither playing genius catapulted him into immediate stardom not only in Austria but all over Europe as well. Even British Royalty coveted Karas after his wildly popular theme and score to “The Third Man” was immortalized in Reed’s film. Reed heard Karas playing one night at a production party and had him whisked away to London to work on the score. The stars were definitely aligned for this collaboration. Unfortunately, Karas, later in his life and career, became an outcast and blackballed in the industry and country he loved so much.

“The Third Man” easily has one of the best entrances ever put on celluloid in the introduction of Lime and even his iconic exit scene (along with his various speeches and insightful analogies) has been copied and talked about endlessly. In Cotten, the film is grounded in contemporary methodology and is quite pervasive and prevalent. “The Third Man” is truly a puzzling, pulpy spy thriller that works on every level and is larger than life due to Reed, Cotten , Welles and Greene’s material.

Throughout, in an example of Reed’s prowess, the film is transformative and unique. Greene’s screenplay make us like lime despite him being evil almost personified. In this moral dilemma we are drawn into a beautifully rendered universe of black and white with endless shades of grays and shadows.

The film remains powerful and important and is the film noir film to beat in some circles. In Harry Lime and even Holly Martins, we get a film that is  a bold and profound character study. It explores the blurred lines of morality and the ubiquitous presence of evil in today’s society. “The Third Man” even boasts a cool graphic novel noir vibe that is quite interesting to dwell upon when every shot is framed like something from a Max Allan Collins book.

It still retains some of the high art house sensibilities with a wonderful amount of influence and atmosphere. “The Third Man” is a film not to missed by fans of noir, intrigue and suspense. It’s a handsome film with monumental themes and issues and the performances from Welles, Cotten, Howard and Valli are amazing to watch for all their mysterious complexities.

“The Third Man” is a great pot boiler and an incredible British film. If you go into watching the film for the first time, then I envy you the experience.  The final chase sequence will leave you breathlessly impressed with it’s unconventional approach. Highly recommended!

“Oh, Holly, you and I aren’t heroes. The world doesn’t make any heroes outside of your stories.” 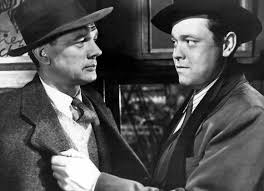