Frustrated at being marginalized at work, Peggy Carter goes on an unauthorized solo field mission.

Roughly a year after Captain America is supposedly lost in action, Agent Peggy Carter (Hayley Atwell of “The Duchess” ) is re-assigned to a field office in New York City, where her talents are obviously squandered. She goes through her work days as more of an office girl and “go for grunt” than the capable and solid agent she was a year prior. Along with her mundane duties (she even has to answer phones), Carter deals with an all male entourage of loud, obnoxious and chauvinistic goons who do not respect her or use her for her talents.

This is especially true of her superior,  Agent Flynn (Bradley Whitford of “The Cabin in the Woods”), who is a total douche bag and the biggest sexist in the office, hands down. Occasionally, Carter is even made fun of her “more than admiration” for Captain America (whom she has a photo of in her desk) who she still pines for.

One day, Carter is notified of the possible whereabouts of the “Zodiac” (In the books, “Zodiac” being a villain team comprised of some really bad guys like “Scorpio”)  and after the fellas all head out to get some drinks (at one point Carter thinks she’s actually invited), Carter then decides to look into the tip and head out on her own to investigate the info. Looking for some excitement and danger, Carter gets what she is longing for as she is pit against more clandestine scenarios, henchmen and booby traps at a very scary looking facility (more of a warehouse, I suppose)  that houses more than just some lunk heads sitting around smoking, playing cards and watching television.

Hayley Atwell is beautifully fantastic in “Agent Carter” and watching her sinking her teeth back into the role of the Agent is fun, diverting and amusing. The short, from second unit director Louis D’ Esposito (Iron Man) and written by Eric Pearson (Item 47), is breezy, kick ass and incredibly enjoyable. I wish it had lasted another 90 minutes. Atwell once again proves that she can scrap and beat up beefed up morons just as well as anyone with super powers to spare.

Aside from the physical brouhaha, Atwell also adds much needed depth using her emotions and motivations as a way into her character’s strengths. She is the real deal and in “Agent Carter” and she holds her own very well. In just a short amount of time, Atwell explores more than just her lack of excitement. Whitford is wonderfully oily and un-likable as Flynn (he tells Carter at one point that her re-assignment was a “pity” decision) and Dominic Cooper (Fleming) makes a great little cameo as Howard Stark towards the end that is woefully brief but very satisfying, especially for Carter.

“Agent Carter” is so far my favorite “Marvel One Shot” thus far. I have yet to see them all, though, and the rest I will review, eventually. But One Shot short looks very slick,  polished, is well shot and acted while sporting nice production values. The pace is convivial and amusing while being a true Marvel picture on a very small scale. Please, Marvel, give Atwell her own full length movie! I am pretty sure us fanboys won’t be disappointed.

Oh and don’t miss the hilarious conclusion with Stark and Dum Dum! You’ll definitely find it quite amusing. Very Recommended! 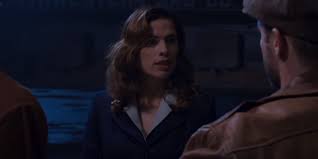