A look at the lives of the strong-willed women of the Weston family, whose paths have diverged until a family crisis brings them back to the Oklahoma house they grew up in, and to the dysfunctional woman who raised them.

“Dysfunctional Family” movies are almost their own genre and I do enjoy a good dysfunctional family drama here and there. I don’t engage in dramas very much but when I do, I like it to be worth my time and effort, in order to enjoy, process and appreciate it. A good drama should engage, provoke and explore. It’s in the exploration of the intricate and difficult lives of several women, in this brilliant adaptation of Tracy Letts’ play, where we are emotionally pulled into a world of broken and angry familial confrontations. The material is ripe full of volatile encounters, twists and even some well placed humor. In order for this material to flourish, the film needs a cast that is willing to really bring their A game.

Director John Wells (E.R., The Company Men) handles the film with a deft and proficient hand but it is Letts’ screenplay that is the stunner here. Her story is replete with noxious and horrid disputes and showdowns among a myriad of family members. Her material is actually more like a horror film because the many encounters and verbal dogfights gives one the chills and scares the shit out of the viewer. Letts’ family is a microcosm of dysfunctional personas and the examination of these dynamic characters is grueling, stunning, shocking and hilarious. But really, Wells’ and Letts’ expedition into the gravity and background of what makes the Weston family tick is a blinding look into ourselves.

Meryl Streep (The River Wild, Silkwood) plays Violet Weston, an incoherent pill popping, chain smoking cancer victim who is married to a soft spoken poet and writer named Bev Weston (Sam Shepard). Bev goes missing after hiring a young and shy Native American woman named Johnna (Misty Upham) to help around the house. When we are introduced to Violent, she is in the throes of a drug induced fit where she not only embarrasses herself but Bev as well. When Bev never returns home, she calls the one daughter she feels can help through her this tough time. Even though she has one quiet and sheltered daughter at home, named Ivy, played by the beautiful Julianne Nicholson (Boardwalk Empire). Nicholson’s Ivy is the most subtle and refined of the Weston sisters and therefore she creates a unique dynamic. 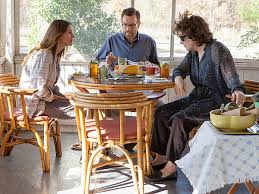 Bev turns up dead and then the arduous journey of raw conflict, emotional torture and fierce feuding begins. Letts’ screenplay allows us no room to breathe as she piles on clamor after clamor of amazing character revelations. The film is an incredible arrangement of tightly directed and wonderfully acted little vignettes. A funeral for Bev ensues but it is when Wells’ movie returns to the Weston homestead (especially during the calamitous dinner scene) where Streep, Roberts and company open up the floodgates and let out a barrage of charged accusations, abuse, testimonials and plain old insults at each other. It is a very tense and awkward sequence that showcases the absolutely powerful talent this ensemble has with this material.

The movie is chock full of these moments and for it’s entire running time “August: Osage County” manages to goes through multiple levels of tragedy, secrets and emotion with precise flourishes of epic drama. Wells’ camerawork (by DP Adriano Goldman) is subtle (many establishing shots where people and things come into and out of frame). He keeps the interiors dark and the heat oppressive while shooting the open plains wide and beautifully bright. While many may not appreciate Wells’ style of composition, framing and cuts, I found it minimally distracting. Wells, rightfully so, keeps the momentum up by focusing on his actors. 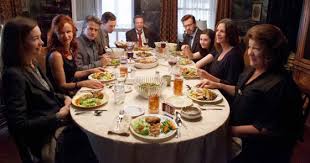 This is where this movie just rocks. The Cast. Plain and simple. I knew Streep would rock this but it’s Roberts that really impressed me. Her usual sober and staid performances are just about moot compared to her powerful turn as Barbara, here. Roberts, in the third act, is unbelievably dazzling and intense.  Every actor has their “moment” in this movie. Cooper is amazing and his blow up at his wife, Mattie, for treating their son, Little Charlie (Benedict Cumberbatch) like a dopey child is incredible to witness. Roberts and McGregor excel in the film with a useful but strained chemistry reflective of their relationship.

Juliette Lewis, as well, shines as a superficial, chatty and needy younger Weston sister. Overall, the whole ensemble, Breslin and Mulroney included, should be noted for an array of fantastic performances in this imputable and destructive story about a broken family with way too many secrets, grudges and animosity. The personal lives of everyone in this movie coupled with Violet’s damaged and rancorous manipulations actuates pure fireworks.

“August: Osage County” is a pretty bleak film. Many characters are not very like-able and many times the sheer maniacal acting barrages can overwhelm (or even turn some off) but it is still a meaty enterprise. It’s definitely dark and can get very repulsive when these many dynamic characters all confront and abuse each other. It does manage to amuse and create humor when it needs to.

It is a tapestry full of homespun and visceral sketches. It has strong performances that leaves you stunned by the film’s end. The film does not wrap up tidy either and the last few moments will tear your heart out. Wells and Letts along with Streep and gang elevate this small peek into a damaged family into the stratosphere with a wealth of story, characters and drama. By the film’s close, though, you may feel as if you may have been run over by a tractor trailer, it’s that grueling. But, from now on, when I do indulge in dysfunctional family dramas, this film will be the benchmark to compare them all to. Recommended!