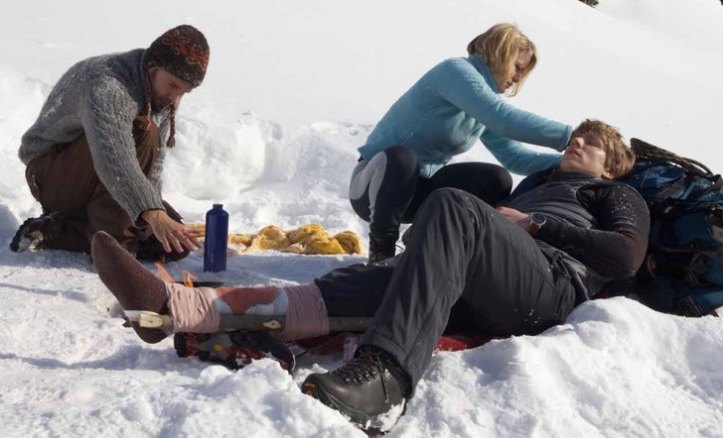 Five young filmmakers retrace the steps of a doomed group of hikers in pursuit of an unsolvable mystery.

Director Renny Harlin (Deep Blue Sea, Cliffhanger, Die Hard 2 and The Long Kiss Goodnight) is one of those directors who at one point deserved better material to work with after making some decent flicks that are favorites for many people. Hell, I watch DH2 and TLKG at least once a year because they are fun, big, dumb and are plentiful in the action department. “Cliffhanger” on the other hand I usually wait more to re-visit since I really like that movie and when I give it a re-watch, it’s like seeing it again for the first time. And who can’t forget that great scene in DBS with Sam Jackson’s “Pep Speech?” Just epic.

But somewhere along the way, with “Cutthroat Island” behind him, Harlin seemed to just wind up taking on some dull and lifeless material and in turn he made critical missteps that eeriely mirrors the bad choices that the once renowned auteur, M.Night, had made. Films like his, Exorcist prequel and “The Covenant” along with the incredibly disappointing “12 Rounds” are examples of how Harlin, while trying to follow what the flavor of the month is, drops the ball, always ruining his films way too early with gimmicks and tedium.

His latest feature, “Devil’s Pass,” is his first feature effort after “5 Days of War” (with Andy Garcia and Val Kilmer) and while he knows how to manipulate the genre of found footage films, it is a cliched outing that falters more than it should. Perhaps it may be a little too late in the genre’s game for Harlin to put his unique stamp on this picture. Especially since the FF genre is chock full of those same very cliches that Harlin makes the mistake of pushing out. It just causes us to acknowledge that we are very weary of the inundated sub genre. But, Harlin’s gotta work, right? And if he has to make a found footage movie he should make the best of it, no? Well, I give Harlin props and kudos for trying and that’s why I didn’t totally hate “Devil’s Pass” but I still can’t really give it high praise.

Harlin and writer first time writer and production manager Vikram Weet explore the true life events of the infamous “Dyatlov Pass Incident” which tells the story of nine hikers who mysteriously died during a field expedition in the Ural Mountains in Russia in the year 1959. Harlin creepily displays gruesome black and white photos of the discovered frozen corpses setting up unease and mood as we read of the specifics on screen of what had transpired. Psychology major Holly King (Holly Goss) from Oregon State U. comes onscreen as she is video taped by her close friend Jensen (Matt Stokoe) and go into another dialog about the Dyatlov Pass Incident, giving dates, names and more intricate info of the calamity.

She goes on to say that she has the blessing of her Professor to follow the footsteps of the original 9 to see what may have gone wrong. She explains that she got her grant and starts to collect others to accompany her to Russia. Here Harlin goes into obligatory territory as we are introduced to others in the research group. Denise, the sound girl,  JP and Andy who are the 2 stalwart climbers who are not afraid of any mountain or the weather and harsh elements they made dish out.  Weet and Harlin take a rather tired approach in the beginning as we find out the brave students are willing to get down and dirty as they go through the motions of how they plan to document and experience the mysterious “Devil’s Pass.” I say, tired, because even though he students are bright, we still feel like they will just turn into your typical horror flick victims and we don’t really care deeply for all of them.

During these early scenes we get to know the group with their hip banter, jokes, arguments and bonding. Harlin handles the Russian scenes adequately with some well placed humor and build up. There is some interesting scenes of the students learning to adapt to the idiosyncrasies of the culture and people of the Ural Mountains. Unfortunately, once the group heads out into the cold and frozen terrain the film becomes a type of wintry “Blair Witch Project.” The similarities are very striking and if you are familiar with that seminal found footage film then you will not miss out on any beats with this film.

Strange things start to happen on The Mountain of the Dead. The group hear strange sounds and gather clues. But little by little they start to accuse and distrust each other as the mystery of “The Pass” becomes exposed. They argue, test each other’s patience,  have sex, yadda yadda yadda. Harlin does create some chemistry between his leads but then the movie takes a weird turn when the group is chased down by some villagers they had dealings with earlier in the film. It seems they want some secrets kept that way.

Furthermore the movie then becomes a “Bunker” horror flick. A tonal shift that doesn’t quite fit but Harlin makes the best with the change by allowing the movie to develop into a claustrophobic thriller. But it doesn’t save “Devil’s Pass” from cliches and tedium. Harlin’s never really get his actors to emote with any range and the sci fi hokum which involves things like “The Philadelphia Experiment” and teleportation gimmicks just comes across really forced and dry.

Too bad because Harlin still has a good eye for framing, build up and mood.  The set up was a bit interesting but Harlin and Weet don’t really follow through with anything here. We get some interesting, strong students who set out to solve a mystery but they are just fodder and get picked off without any of them solving anything or proving that their theories and research were accurate.

In it’s defense, the ending is quite interesting  but it is compromised by uninspired CGI and it may be satisfying to some but not all. But “Devil’s Pass” is another miss for Harlin and like I said earlier, it was a valiant try but Harlin doesn’t do anything new here and the movie feels unauthentic and rote. It has a bit of mood and it looks good in spots but the flat story and the even flatter performances mire it down in repetitious inanity.

I’ve noticed some pretty good reviews out there from genre fans but they all seem to admit that their expectations were low going in. Not for me. I expected a decent thriller from Harlin and in that regard, it just didn’t do it for me. Only watch if your must see every found footage flick out there even those that look promising but eventually stall. Better luck next time, Harlin. Maybe a “Deep Blue Sea 2?”