After her mother’s mysterious death, Nica begins to suspect that the talking, red-haired doll her visiting niece has been playing with may be the key to recent bloodshed and chaos.

Writer, director and “Chucky” creator Don Mancini (Seed of Chucky) returns to  his seminal horror franchise with “Curse of Chucky,” the latest installment which comes nine years after “Seed of Chucky” which he wrote and directed as well. Despite some lengthy talks with Universal and David Kirschner, over which to do first,  a remake/reboot or a direct to video entry, Mancini was given the greenlight to do a sequel late last year for a Halloween release this year. It was to be a  completely different entity apart from the broader and eagerly awaited remake.

The sequel, “Curse of Chucky” (changed from “Revenge of Chucky”) was promised to be a more gutteral, scary and uncomedic return to form for Mancini, Dourif and company. Supposedly as a result of fans wanting less humor, more fright and uncompromising scares in another film.

Obviously, that is no easy task considering that horror junkies love sequels but can be fickle whenever a sequel makes a promise to return to what initially made an original first entry like Tom Holland’s “Child’s Play” so popular. Even throughout the Freddy Krueger, Michael Myers and Jason Voorhees films we occasionally would get some attempts, hit and miss alike, to go back to basics. So, Mancini had his work cut out for him. I can safely say that despite the low budget and straight to video stigma, “Curse of Chucky,” has a bit of retro horror charm that keeps it’s head barely above water. Mancini manages this by re-visiting older themes, motifs and supplying some well placed scares. Cheaply made and slimly stylish the movie is a minimally capable, time filling horror romp. But even with little feet like his, this Chucky still stumbles and clunks around a bit. 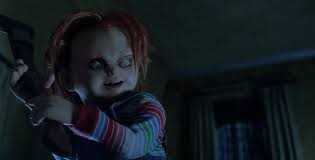 Brad Dourif’s real life daughter, actress Fiona Dourif (The Master and True Blood) stars as NIca, a young woman confined to her wheelchair since an early age. She and her depressed mother, Sarah live together in a large, almost “Bates” like house that is old, beaten and dreary looking. Soon after receiving a large package which turns out to be a new “Good Guy” doll, Sarah is found dead by Nica from an apparent suicide. Nica’s sister, the bitchy Barb (Danielle Bisutti from Insidious 2) and her husband Ian, a nanny along with their daughter Alice (Summer Howell) turn up for the funeral and to try to re-locate the handicapped Nica.

They also try to get her to sell the home. Nica refuses. Soap actor A Martinez (LA Law) plays Father Frank, an old family friend. Before cooking dinner with her aunt, Alice discovers Chucky (Or perhaps it’s the other way around) and she instantly grows attached to him. Chucky appears brand spanking new in this movie, too. His clothes and hair are clean and his face is un-scarred, He looks innocent enough which is a good way to re-establish him much like the trusting sidekick doll he was to Andy so many years before.

While Nica and Alice make dinner and they are not watching, Chucky springs into action and starts to try and pick off the dinner guests starting with Father Frank (There is a car accident scene with the poor padre that is quite intense). Mancini’s dinner scene is actually quite suspenseful with a classic Hitchcockian vibe to it.  Meanwhile, Mancini’s script covers some interesting ground as he slowly builds up mood and an eerie sense of dread surrounding the house, Alice, Nica and even the Au Pair that Barb and Ian hired to watch Alice.

Nica, Barb and Ian are left to wonder what is going on with Alice and Chucky while Chucky has plans of his own to eliminate the rest of the family.  Nica researches the history of the doll after Father Frank recalls seeing Chucky on the news. Her research takes her back to the history of the first film and the events surrounding Charles Lee Ray (Brad Dourif). As she looks in further, other are harmed in grotesque ways. Nica is blamed and she has to contend to trying to prove her innocence to Barb and Ian all the while discovering that Chucky has an axe to grind with her family and that he is out for revenge and to finish what he started 20+ years before. Mancini touches upon Chucky lore and tries to keep it fresh.

He has a good grasp of camera movement, placement and composition here and this bit of creative flourish from DP Michael Marshall (Ginger Snaps Back) creates very smooth mood and style. Something that Mancini wants while his horror film plays out. Mancini’s film sometimes looks pretty good and creepy and he made the right decision in making the house a character in the film, it even sports a freaky elevator that creaks and moans as it’s used.

There are plenty of shock scares, sexual inuendos, close calls and when Chucky is found out by Nica the movies charges into high gear. Dourif is great  to hear once again and see as well. He is back in some flashbacks that reveal events right before the onset of “Child’s Play.” Dourif’s daughter, Fiona is pretty good here. She is believable and completely capable in the role of someone wheelchair bound. During the film’s character exploration she becomes a sympathetic person we can relate to. She is the only very good artist on display here along with the young Howell. Chucky is kind of hit or miss.

There is a reveal that some of the original trilogy purists will definitely hate since it ties the film, which I thought was trying to distance itself from, to the 2 later entries. Chucky is also rendered up in some hokey CGI that is a bit laughable and cringe inducing. In close ups (before his face undergoes it’s evil transformation), Chucky’s face seems so photo-shopped smooth and perfect that he appears wildly effeminate and fake. When the shots of him running do not linger long, he comes across ok, though.

Other shots of Chucky with axes and knives look ok as they cut to and fro between an Animatronic version of him and there is one pretty freaky scene of Chucky coming down the steps from the attic that looks almost like something out of a Ray Harryhausen movie. Mancini controls the levels of fright well but something seems amiss and I think it’s the story. Well, there isn’t much of one. I don’t know why that should bother me since this is just a horror flick but it does. It appears sometimes that the film is just piggy backing “Child’s Play” with a very anemic subplot involving Nica’s mother and father.

It was like they were jumping up and down and yelling: “Look! We are connecting this movie to “Child’s Play!” Isn’t that novel?” or “We are doing flashbacks! Cool, right?” Mancini’s “Curse of Chucky” is a throwback but not completely in the way I would have liked. It harks back to more trashy cinema but without anything new to add to the mix. Some sequences are just ok and others are more pedestrian in execution. It’s fun to see Chucky back, though, but I would have liked a bit more punch in the style, action and atmosphere.

Most of the confrontations scenes are cool especially when Chucky tries to eliminate Nica in her garage. The movie also has inconsistencies that the viewers will immediately recognize and shrug their shoulders at. This all leads me to what I really took points off for. The last act and ending. After things start to conclude Mancini shoves a “what the fuck?” moment down our throat which involves a cameo from a character…not one from the original trilogy but the last 2 entries! Argh! What? As soon as this happens the timeline and resolution gets all fucked up and I was madly confused. Then they add insult to injury and include another scene with Alice and Chucky that appears like it’s from some other movie.

The 2 scenes negate each other and just succeed in completely blowing off everything that made the film stand on it’s own for an hour and a half. Too bad too. It felt way too tacked on and forced. I have no idea what the continuity, order of events or time lime are in this entry. Does it take place after 3 or after the 5th film? I dunno. I don’t think Mancini knows either, And what of the remake/reboot? How confusing is that shit gonna be? I’m no expert on the order of the movie but I was lost, man. Really lost.

This Chucky movie was a missed opportunity. I was glad to see Chucky back even though he looked like a cross between a female muppet and a red headed hippy sometimes. I liked the way Mancini shot the movie and the mood he obtained. His decision to center on events before “Child’s Play” was questionable and trite. I liked Fiona and Brad Dourif in this of course. I dug  Joe Lo Duca’s score too.

The whole movie tried valiantly to jump back into that retro pool of schlocky horror and it barely succeeds. It pushed out a bit of charm here and there during some “winks” to the fans which was ok. It isn’t a terrible movie but it’s a bit tired looking and just looks cheap. What really cooked my noodles, though, was the really convoluted ending that appeared as if someone incorrectly edited in 2 wrong scenes to screw up the continuity. Oh and don’t forget to stay watching after the end credits for yet another ending that will just further confuse the shit out of you.

Fans of the original trilogy will go ape shit over it, though. If you need a time waster, though, “Curse of Chucky” will suffice but just be ready to be reminded of when this franchise was actually fresh and interesting. The rating reflects the nostalgia feel of the film for the most part. Look out for “Orphan Black’s” Jordan Gavaris in a cameo as a UPS delivery dude.