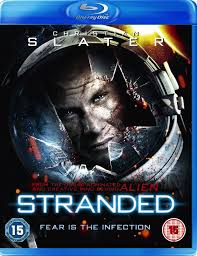 Four isolated astronauts on board a bio-dome space craft, experience a ghostly intercession after a meteor storm, leading to paranoia, fear and death.

Boy, I have seen a lot of bad movies lately. Most of them are barely a blip on the radar and I am surprised I actually finished “Stranded.” The movie is directed by Roger Christian ( Christian won an Oscar for set decoration for Star Wars) who brought us Bandido and American Daylight. This Z movie is a derivative little sci fi clunker that despite an interesting set up turns out to be an “Alien” meets “It’s Alive” mish mash of bad and incoherent sets, bad lines and bad 1970’s special effects. It stars Christian Slater ( who must have owed someone a BIG favor) as Col./Astronaut Brauchman.

He and 3 others are inhabiting the Moon Base “ARK” on a scientific Ore research mission. After a power loss caused by a meteor shower, Astronaut Ava Cameron (Amy Matysio) gets infected (after she cuts her finger) and impregnated by a sentient virus or life form that gets into her blood stream. She gets knocked up by the unseen ET and is quarantined by Brauchman. The other 2 inhabitants, Dr Krauss (Brendan Fehr) and Bruce Johns (Michael Therriault) are obviously against this and need face time with Ava to examine the alien form growing inside of her. What ensues is  by the numbers horror/sci fi junk. Oh and what junk it is.

Ava gives birth to a creature that resembles Bruce (who also gets infected). But not before we go through scenes of people lurking, arguing and screaming and even discovering shed alien skin and so on. Booooring. The film does not have any kind of realistic science in it and the exteriors of “ARK” looks cheap and out of scale.  Also since the power is out the movie is immersed in an annoying darkness.

Anyway, a “communicator” or recording device of some kind is actually an LED reading lamp. Man, talk about cheap. This film gives low budget movies a very bad name. I must admit that some dialog is just interesting enough to propel the story and the actors are kind of ok in some scenes but “Stranded” amounts to a very dark looking, hokey and futile exercise in random absurdity. Slater overpowers his co-stars when he goes around yelling hysterically not acting the part of a leader at all. They all make stupid choices and when the alien matures he looks as if he were dipped in congealed lard.

I mean, I like a low budget flick once in a while but sheesh! The film’s resolution is out of place and not suspenseful or frightening at all. It felt more like a completely different bad movie that was tacked on. So if bad EVERYTHING is your cup of tea then give “Stranded” a watch of not then avoid this mess and give it a  pass. Please! Not recommend at all unless you want to rip your eyeballs out. Sorry, Slater, I like ya…but damn! 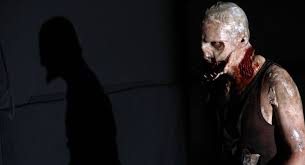