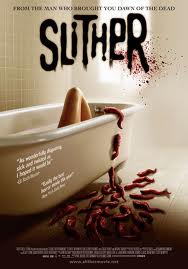 A small town is taken over by an alien plague, turning residents into zombies and all forms of mutant monsters.

“What the fuck was that?”

Jeez, I don’t know where to begin here. “Slither” is just so much damn fun that I have to try and get my thoughts in order to write this review. There is so much to get into and rant gleefully about like a nerdy schoolgirl with this movie. It’s slimy, gory, reverential, hilarious, campy, nasty, smart and did I mention that it’s gory? Oh yeah, I did. It is an outrageous blend of hysterical sci fi and horror that is easily one of the most quote-able genre flicks to come along in a long time.

It’s replay value is through the roof and it is written with a fan of these types of films in mind. It goes right for the jugular and never lets go because Gunn and company keep the movie consistently fresh. “Slither” hops genres too. It is a horror story wrapped in a science fiction film. Gunn incorporates humor and reverence into “Slither” and he does it knowing what  fans of these types of film want. Dark humor, intensity, heart and riotous mayhem. 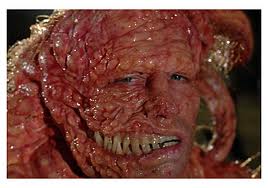 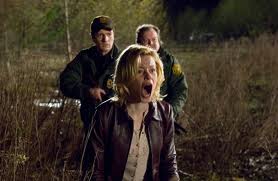 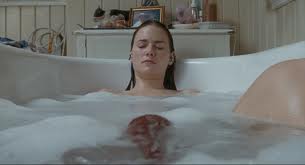 James Gunn is a “Troma” alum and he injects “Slither” with an affection for low budget tropes. Except it doesn’t look like a b movie but revels in  feeling like one. Gunn just about references every sci fi/horror classic known to man. Everything from Cronenbergs “Shiver” to “The Blob” to Romero’s “Night of the Living Dead” to my favorite: R.J. MacReady’s Funeral Home which references  John Carpenter’s “The Thing.” Gunn gets the movie going with a classic sci fi adage. A meteorite from space. It lands, not completely burned up, in Wheelsy, South Carolina. It transports an alien parasite/life form that is malevolent, vicious and cunning.

Gunn cast Michael Rooker as Grant, who while screwing around in the woods outside his home gets attacked, assimilated and has his memories absorbed. Suffice it to say Gunn adds layer upon layer of  bawdy and lewd madness. Grant exhibits very strange behavior that involves eating raw meat and small animals plus what gives him away are those funky tentacles that protrude from his chest. Yuck.

The beautiful Elizabeth Banks (30 Rock) plays Grant’s wife, Starla (great name huh?) and she contacts Mal Reynolds, oops, I mean Nathan Fillion (Firefly, One Life to Live, Serenity) as Starla’s childhood crush, Sheriff Bill Pardy. Grant moves on to Brenda and impregnates her with the alien parasite and nasty little vermin offspring. Gunn in no slight way shows us how vile and impure all of this stuff really is.

There is just about every conceivable grotesquerie there is in this freak-show. Men and women eat raw meat, explode, turn into zombies, get larger and larger with alien worm puss and not to mention Grant’s body absorbing townspeople and morphing into some large abomination worthy of Rob Bottin himself.

Actor Gregg Henry ( Body Double, Payback) plays the Mayor of  Wheelsy named…MacReady. Ha! I love it! Henry steals every scene he’s in as a foul mouthed, boozing and oafish politician. Henry gets to say some incredibly amazing lines from Gunn like: “Look up cocksucker!” or when told that martians are from mars he responds: “Or it’s a general term meaning ‘outer-space fucker.” Gunn just allocates such great material to all his actors and they excel in providing a fun ringside seat of alien/human decimation.

Gunn also delivers some great action set pieces like when a teen named Kylie is assaulted by the alien slugs in her bathroom and she has to use her wits to survive not only the slugs trying to connect with her (she is also able to “see” what they really are and where they come from) but from assimilating her entire family.

The attack sequences also move from Pardy, Starla and Mac being chased in a pick up truck to the deputies being turned and killed to Brenda in the barn about to burst from all of the nasty and gooey aliens inside of her. Starla also is taken and brought back to the Grant-Monster who is nesting in the living room in her home. Starla tries to appeal to Grant who is in telepathic control of the rest of the infected deputies ( like a hive mind ) and townspeople.

Grant’s memories come back but not before he discovers what he’s become. Gunn kicks up the atrocities and mayhem in fantastic fashion by giving “Slither’ a like-able and respectful air of tongue in cheek ridiculousness. There are gags abound too. The ending shall I say is indeed quite explosive and every bit as fitting as we have come to expect in this wild and hellacious movie. 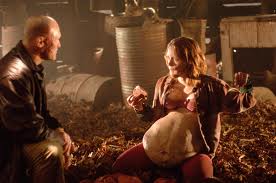 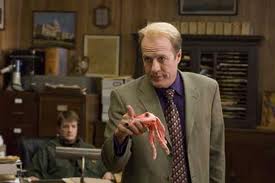 Gunn’s “Slither” is a joy to watch because of the respect and love that is put into the production. All the references aside the movie does have it’s own identity and it never fails to impress with the craftsmanship it displays. Great music, an endearing and capable cast and a very reminiscent but showy story makes the film all the more tantalizing to watch.

It will at times remind some viewers of other cult films like “The Deadly Spawn” and even “Invasion of the Body Snatchers” but it never COPIES them or tries to be them. What Gunn does is akin to a love letter to these awesome drive in horror/sci fi stories about aliens taking over the earth not in spaceships but by invading our bodies and minds. It is a perfect homage without being a rip off.

It remains vivid, eye opening and vulgar in every way and even if you are not a gore hound you will find that you can never take your eyes off the movie. Fillion (who intentionally chews the scenery in parts) is hilariously astounded by everything going on and Banks is spunky and deft in having to adapt to killing the creatures and fending off the Grant-Monster.

That leaves Rooker who is perfect as Grant. Serious as a heart attack and completely brutal and bestial in the role. “Slither” is a wonderful watch and if you want to escape into an absolutely fucked up universe of monsters and alien slugs you need to watch this movie and try not to turn away in disgust because if you do you may miss a reference or a great sight gag.  Highly recommended!!! 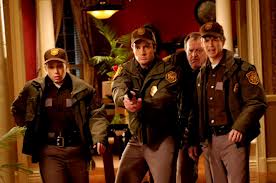 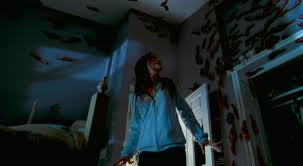 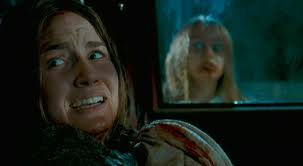 Here are other movies that “Slither” references. See if you can catch them!

Night of the Creeps