A pair of aging stickup men try to get the old gang back together for one last hurrah before one of the guys takes his last assignment – to kill his comrade.

What the hell did I just watch? Oh man, is this what Christopher Walken and Al Pacino been reduced to? Lowbrow humor about Boners, prostitutes, and snorting prescription drugs? “Stand Up Guys” establishes that it is parody pretty early on but it isn’t even good or witty parody. It’s a bunch of disjointed skit-like scenes that that are neither funny or remotely smart. It has some interesting bits of the “fish out of water” or “I’ve been out of the game” elements but they only elicited a smirk or a slight giggle from me. I never actually laughed out loud. Not even once. I did sit up and take notice at perhaps the coolest part of this mess but I’ll get to that later.

I really wanted to enjoy this but instead watched something that was very similar to the comedy “The Crew” with Richard Dreyfuss and Burt Reynolds. “The Crew” while not a classic either still had some great chemistry among the leads and while the story stalled in places it got the parody right in more than one instance. “The Crew” is even a guilty pleasure of mine. I watch it once in a while.  As much as I want to judge “Stand Up Guys” on it’s own merits I just can’t. The film is too feeble and expects us to enjoy two, no, make that three excellent actors trade very SNL type dialog that seems more appropriate in an “Harold and Kumar” movie. Too bad. 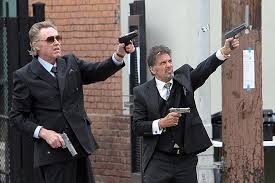 Director Fisher Stevens ( Californication and Short Circuit) and writer Noah Haidle brings us a movie of firsts. First directing gig for Stevens and first major gig for Haidle for the writing. Unfortunately neither the direction or writing amount to anything that good or funny. Al Pacino ( Carlito’s Way, Scarface, The Devil’s Advocate) plays an ex-mobster simply named “Val” Val is being released from prison after being incarcerated for 28 years. His friend “Doc” played by Walken is there to pick him up. What Val doesn’t know is that Doc has been ordered to whack Val by crime boss “Claphands” ( A name that sounds like a Dick Tracy villain ) and he has until 10am to do it. Val, being quite horny, convinces Doc to break into a pharmacy to get some type of erectile meds in order for him to “perform.” After he takes a handful of them, which is a very stupid thing to do, he has Doc take him to a brothel nearby.

A few sex and dick jokes later Val lands in the ER only to confront Julianna Margulies as Nina. Nina happens to be the daughter of their other friend, Hirsch. Nina and another Doc have to wait around after all of the boner humor is done and Val is given something for his perpetual hard on. Ugh. Sometime later after Nina tells the guys that Hirsch is in a home and slowly dying. They decide to pick him up for a last hurrah around town. A last hurrah that includes fast cars, ( with a stolen Dodge Challenger SRT8 no less ), close calls, police chases and guess what? A brothel! Haha, Sooo hilarious and original! I must admit that Alan Arkin was refreshing to watch and it made the movie suck a bit less but even Arkin is stalled here because the un-witty banter and humor is just too pedestrian. 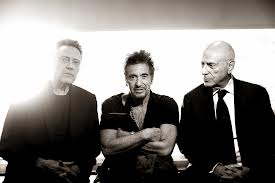 So, after Arkin croaks, because we don’t see THAT coming. Doc and Val find a naked girl named Sylvia ( Vanessa Ferlito from “Death Proof”) in the trunk of the SRT8 and helps her  get even with some thugs that violated her. Ferlito is quite cute and sexy but here she is wasted. She’s not appealing enough to really like and is forced to deliver a very bad one-liner about “The Nutcracker”  Ho hum. There is dull subplot about Doc’s grandaughter who is a waitress and some money that Doc wants to leave her and then by the third act Doc and Val ponder how things will go down. Will Doc spare Val and defy Claphands? Or will he do him in? Well, by the time the climax and story wrap up I’m not very interested or even care about what happens. Stevens gives his gravelly voiced leads way too much room to go overboard on delivery, exposition and much of the film is spent with the two trading lame quips and one liners.

They are given way too much room to indulge. Watching Arkin, Pacino and Walken all together onscreen should have been a hit out of the park here. Stevens takes way too long to let them play well off each other, unfortunately. Most of the scenes with Pacino and Walken has a sort of desperation about it. It tries to be some kind of “Bucket List” meets “Goodfellas” type comedy or maybe it is trying to cash in on some of the vulgar sensibilities of “The Hangover” movies except using a couple of elder actors that should have really dissected this script before accepting the roles. The material is way beneath them and if they wanted to make this work they should have had a director on-board who totally gets the ironies, wit and aplomb that a comedy of this type involves. I can in no way recommend this movie. A shame really. I cringed way too many times during most of the painful scenes with these legends instead of laughing and appreciating the humor that is really lacking here.

Oh and back to the reason I gave this movie it’s rating, well maybe 2 reasons. There is a shootout and the film could have used a few shootouts and the other reason is: Doc and Val quote Nada  ( Roddy Piper) from John Carpenter’s “They Live” The only really cool part of the  movie.