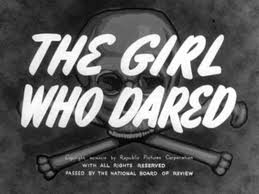 “YOUR BLOOD WILL RUN COLD…it’s got those CHILLS and THRILLS!”

“The Girl Who Dared”

I came across “The Girl Who Dared” late one night while browsing on Netflix. I queued it and watched it the next morning. Being a sucker for mysteries of that era I kind of reveled in it. Even though it’s lacking in parts, I ultimately ended up enjoying it for what it was.  A classic B movie “quickie” that is both equal parts creepy and campy.

“The Girl Who Dared” is a fast and breezy who-dunnit from Republic Pictures that has some interesting dialog, some smart alecky characters and light doses of comedy. The ensemble all work well here and they have some tongue in cheek fun with the material. In the 40’s Republic Pictures batted these short running time films out as double bill films and they were for the most part very successful if not a bit wry in tone and eventually disposable. 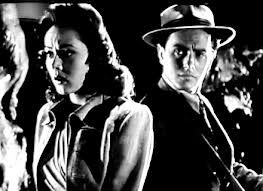 Howard Bretherton (Adventures of Superman, Charlie Chan) directs Lorna Gray (Captain America) as Ann, Peter Cookson (A Guy Named Joe) as Rufus and Grant Withers as Homer. The trio lead a variety of characters that are participating in a “Haunted” weekend at the large estate of Beau Richmond (John Hamilton of Adventures of Superman). Ann is Beau’s cousin and he rounds up a bunch of estranged members of his family to his estate for some “Ghost-busting” Ann and her brother encounter car trouble on the way to the Georgian Island and eventually recruit, who they think is a mechanic, a mysterious guy named Homer.

Once they arrive Homer leaves (or so we think) to head back to the garage where Rufus’ car is left for the night. After some intros and  a heated argument by a separated couple (that were unknowingly duped into showing up at the same time) we get to the nitty gritty. They group find themselves being stalked by a dangerous uninvited stranger who appears and disappears during the night. The group, after a scary tour of some wreckage and a ghost sighting, get stranded on the island. During a storm they  try to get to the bottom of not only a disappearance but a murder too. 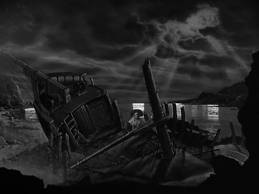 I won’t go into any more details about the plot since the running time is only 52 minutes and there is not really much left to go over but there is some double crossing, missing radium, dark tunnels, shadowy figures, bodies being moved around and even mistaken identities. Willie Best is even here as the stereotypical house servant who in more than one occasion made me cringe with the old nervous and afraid routine that many African Americans were stuck doing  at that time.

“The Girl Who Dared” is a decent “Big dark house” thriller that flies by and keeps you guessing until the very end. It’s cheap, has some twists and cashes in on the “Ten Little Indians” motif created by Agatha Christie. The actors all deliver their lines proficiently and with machine gun precision. The ending is a bit hokey but there is some great interaction between them all that makes it worth a watch.  So, grab a big warm blanket and plant your butt on the sofa one rainy night and check out “The Girl Who Dared” by the time you yawn, burp and blink it’ll be over.

“The Girl Who Dared” is currently available on Netflix Instant Streaming. Enjoy! 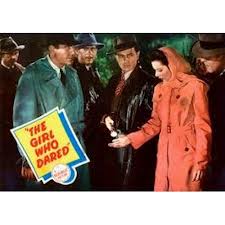 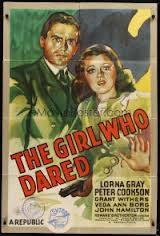