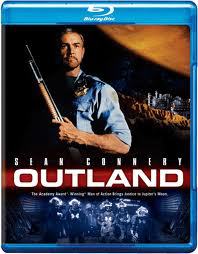 In the distant future, a police marshal stationed at a remote mining colony on the Jupiter moon of Io uncovers a drug-smuggling conspiracy, and gets no help from the populace when he later finds himself marked for murder.

The consistently like-able film director Peter Hyams (2010, The Relic, Running Scared) brought to the screen, in  1981, what is obviously a “High Noon” in space sci-fi movie. His film, called “Outland” stars ex-James Bond actor Sean Connery (Rising Sun, The Untouchables) as Marshall William T. O’Niel.  O’Niel has the pleasure of watching over a Titanium ore refinery way out on a moon of Jupiter, Io. The script written by Hyams as well is thematically a western plain and simple. It wears this theme (and comparisons) on it’s sleeve and makes no pretenses about what it truly is. This is why I like “Outland” very much.

It’s about good guys and bad guys. Nothing complicated or very dynamic except for the actors are on display here. There are some very good performances from the late Peter Boyle as Mark Sheppard, the Director of the mining facility. James B Sikking (Hill Street Blues) as Deputy Montone is near perfect here as a by the book law enforcer. Frances Sternhagen is the irascible Dr. Lazarus and she steals every scene she’s in as the reluctant Health officer that is forced to chose a side when the battle comes down to O’Neil and the menacing Sheppard.

Hyams begins the film with Jerry Goldsmith’s (who did “Capricorn One” with Hyams also) very cool title track which leads us up to an incident that starts the proceedings. A miner, suffering from sort of mental breakdown or psychosis, freaks out and opens his space suit to the atmosphere of Io which causes him to decompress and die explosively.

It seems that this miner is not the only one. There seems to be a pattern and O’Niel’s deputies and even Doc Lazarus have their hands full with miners acting violently and suffering from a form of cabin fever. Soon after another miner exposes himself to the Jovian atmosphere by getting in an elevator which leads outdoors. O’Neil enlists Lazarus to help him with these mysterious circumstances and discreetly they discover that the miners all have something in common. A psychotic drug in their systems. Yet another worker also attacks a prostitute and Montone hastily dispatches him much to O’Neil’s dismay.

When O’Niel approaches Sheppard he is met with resistance. It seems that Sheppard has a different outlook and philosophy regarding his men. “They work hard and I let them play hard” – is what he tells O’Niel, who seems to have his back up against the wall since no one wants to help him take down Sheppard. Sheppard is supplying the men with some hardcore drugs and he is turning a blind eye, like most of O’Niel’s men, to the problem. For Sheppard it’s business as usual and O’Niel is not having it. 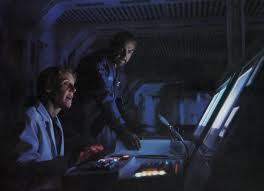 Hyams brilliantly directs Connery here who was born to play O’Niel. He isn’t as tough as nails as, say, Malone from “The Untouchables’ but he is bad ass none the less. He’s kind, by the book and is a man with a good moral center but that isn’t enough to keep him out of trouble. After he sends his wife and son away, O’Niel now has to face Sheppard. Sheppard receives a phone call from some “benefactors” regarding O’Niel and in turn he sends for some hit-men to take care of this Pebble in his shoe. It’s around here that Hyams jacks up the suspense and the movie truly becomes “Hign Noon” in space.

O’Niel searches for help and never gets any and he even tries to enlist some of his men who back out. Only Dr Lazarus is willing to help but reluctantly. So, since O’Niel is monitoring Sheppard’s com system he prepares himself for the impending showdown with Sheppard’s thugs. “Outland” is tight, well paced and supremely acted. Hyams gives us a claustrophobic setting and uses it to maximum effect here. Every set has that dirty tech look and the miners all look tired, impatient and frenzied. Stephen Goldblatt’s camera work is impeccable as is Goldsmith’s score. Long hallways, hatches, air locks, rusty elevators, cramped bunk spaces, an outlandish “sex’ bar and some exquisite shots of Jupiter are all nice touches in “Outland” 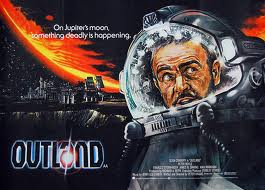 Upon it’s release “Outland” was a bit vilified for it’s obvious western style conventions. Over the years that viewpoint has changed a bit. I applaud it’s conventions because Hyams treats the material and his superb leads with respect. Connery is great in the lead and he and Boyle have some very interesting and cryptic exchanges. Sternhagen steals her scenes as she quips to and fro with Connery. She brings an old school charm as she runs about talking to herself and being jumpy and nervous.

The story is lean and the climactic showdown does not disappoint especially as O’Niel learns the hard way that some people he thought he could trust are really deceitful scumbags. Hyams delivers the quintessential western in space with “Outland” He gives us a frightful, real and sobering look of what life out on the frontiers of space could one day really be like. Enjoy, gang! Highly recommended! 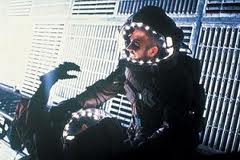 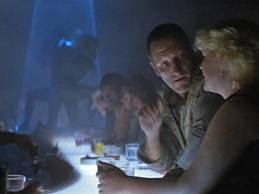 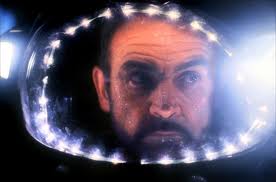