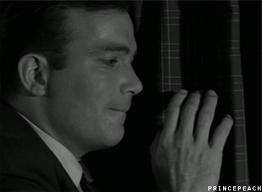 “Portrait of a frightened man: Mr. Robert Wilson, thirty-seven, husband, father, and salesman on sick leave. Mr. Wilson has just been discharged from a sanitarium where he spent the last six months recovering from a nervous breakdown, the onset of which took place on an evening not dissimilar to this one, on an airliner very much like the one in which Mr. Wilson is about to be flown home – the difference being that, on that evening half a year ago, Mr. Wilson’s flight was terminated by the onslaught of his mental breakdown.

Tonight, he’s travelling all the way to his appointed destination, which, contrary to Mr. Wilson’s plan, happens to be in the darkest corner of the Twilight Zone.”

Director Richard Donner (Superman: The Movie, Scrooged, The Omen) directed this season 5 entry of Serling’s The Twilight Zone and he delivers one of the most taut, suspenseful, creepy and surreal episodes ever shot for this seminal TV series. Impeccably written by master storyteller Richard Matheson (I am Legend) this episode tells the tale of a man grappling with mental demons that threaten to re-appear during a routine airplane flight with his wife. William Shatner plays Bob Wilson and from the get go Donner and Matheson establish that Bob is not quite all there.

He’s nervous, fidgety and distracted. He boards the airplane with his wife in a unsettling mood and tries his best to reassure his spouse that he is fine. While he seems convinced that he is, his wife appears concerned. She tells Bob that he would not  have been able to fly had not his Doctor think that he couldn’t. As they sit, Bob gets a window seat, trying his best to keep himself on a even keel.

From the beginning Donner sets a very claustrophobic tone. The airplane is old fashioned, cramped and resembles a prison cell with wings. The lighting is dim and the camera pans around to reveal stoic and strange faces. After take off Bob and his wife, Julia go into some detail about Bob’s nervous breakdown, which occurred on an earlier flight.

Once airborne Bob tries his best to relax but Shatner does a great job keeping his emotions under wraps. Eventually Bob lifts up his window blind and takes a gander outside into the rain soaked night and sees a strange figure that resembles a large teddy bear with a twisted and frightening visage.

The creature, which only Bob seems capable of seeing, is causing some damage to the wing in mid-flight. After Bob tries multiple times to alert not only his wife and the crew (One of which tries placating him transparently) he grows impatient and starts to unravel displaying symptoms of his earlier breakdown.

Bob, in a desperate attempt steals a gun from a police officer that is on the flight and does what only he seems capable of doing. But will he endanger his wife, passengers and the crew? Will his actions cause the plane to land or worse, crash? Is the creature on the wing a figment of his fragmented imagination?

Donner and Matheson expertly weave a story of fear, repercussion and they explore the thin line between the real and the impossible. One of the very strongest themes in the grand playground of Serling’s imagination. This episode works so well on so many levels and it is dynamic and bold. We feel for Shatner throughout the episode and we even root for him as he attempts to confront and destroy the creature.

Shatner is why this episode works and in his and Donner’s capable hands we get one of the scariest and thought provoking episodes in the TZ canon. The ending is appropriate and fitting. We get to understand what Bob has gone through as we watch the final shot reveal one of the best surprises inside and out of…The Twilight Zone.

Vic’s Note: The Twilight Zone is still available on Netflix Streaming. Seasons 1, 2, 3, and 5 are available. Enjoy!