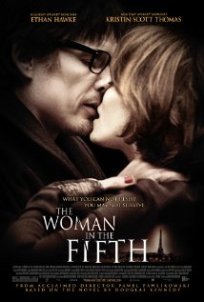 A college lecturer flees to Paris after a scandal costs him his job. In the City of Light, he meets a widow who might be involved in a series of murders

“The Woman in the Fifth”

The Woman in the Fifth is a rare type of dark fantasy or fairy tale with some interesting depth psychologically. Too bad that a film that looks so beautiful and has two great leads in Ethan Hawke and Kristin Scott-Thomas is so boring and confusing. I perhaps missed something or I’ve grown impatient with pretenses that I could be a bit jaded sometimes. Maybe it’s just me that is not seeing the film in the right light. I just felt that Pawlikowski’s very pretty and sometimes seedy movie is missing something.

Hawke once again plays a writer named Tom Ricks (with some very thick eyeglasses) that relocates to Paris after being released from a mental hospital facility in the States. He does so to be closer to his ex-wife and daughter. It’s appears that Tom’s a one hit wonder and he’s currently down in the dumps and is about to re-ignite his career with a new book. Unfortunately, his first go round with approaching his family does not end well. The reunion is a bit awkward and rough with all involved and Tom is forced to leave the apartment while his ex wife calls the authorities. 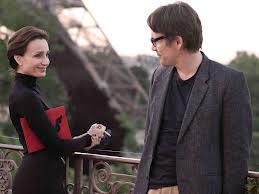 Tom is then forced to take a bus to his hotel but while asleep he is robbed and forced to stay at a run down and dirty hotel that is run by a shady dude named Sezer that allows Tom to stay there with one string attached: He has to take a night job in a dark and dank room in some underground bunker. His only job is to allow some rather weird and suspicious people in and out of the clandestine bunker. It’s all ok for a while and Tom shows that he can mange the job but at the hotel he has, loud neighbors, a very bare room and is attracted somewhat by the poetic figure of Sezer’s girlfriend.

While visiting a book shop he is identified and asked by the owner to attend a book party where he meets Margit, a mysterious, enigmatic and sexy woman who is supposedly a widow, her writer husband having met a sort of strange fate. Tom is smitten with Margit and he gravitates to her and eventually they become very close and share some passionate moments together. The film then becomes immersed in blurring the lines of what is real, what is in Tom’s mind or both.

It becomes a mysterious film to unravel and to get through when there are so many puzzling and perplexing things going on. Is Tom losing his mind? Is he not completely cured then? What is Margit’s intentions? Why does she want Tom? Why does she want Tom to forget about his family? All the meanwhile in other story details that go nowhere, we have Pezer’s strange side business, blackmail, disappearances, Tom’s relationship with Pezer’s  girlfriend, the murder of a loud and quite annoying dude that lives next to Tom. Who killed him? Tom? Margit or was it another hallucination or dream? Does Pezer’s girl know something we don’t? Is she protecting Tom somehow after their  brief fling? 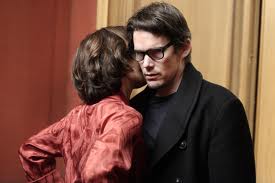 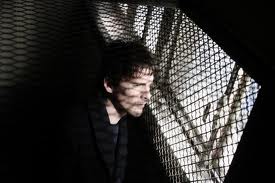 The movie never lets up on opening all of these doors for the viewer but eventually it seems the film gets bogged down in too many complex dynamics. Too many questions and not enough answers. Not that we need everything answered but I wanted to see at least one or more things develop organically and the movie just stalls for me. Too bad too because the locales and cinematography  are breathtaking. Unfortunately, the film sinks itself in overdone allegory and just becomes a mish mash of genres.

It is daring in parts and quite elusive and I get the whole “open to interpretation” thing but I wanted a bit more I guess. The film didn’t quite resonate with me and by the end I just ended up scratching my noodle and thinking: What the hell did I just watch? The ever watchable and very morose Hawke is understated but strong in the role and Scott-Thomas is adequately tailored for this type of role being very coy, dangerous and other-worldly.

Was Tom seeing and making love to a ghost? Does he cross over leaving his family, Pezer’s girlfriend and his job in order to get what he wants from Margit? Is she an angel or the devil? You tell me. I have no damn clue. I must give the movie makers some credit for trying to give us a Hitchcockian type of psychological thriller but in the end it felt like a frustrating episode of “LOST.”  At least by the end of “Jacob’s Ladder” we get the “A ha!” effect. It’s worth one watch if you want to get mad at a movie and throw something at your screen.