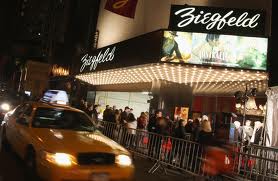 Vic’s Note: I wanted to share this fantastic article from The New York Post written by Lou Lumerick and published and posted back in July of 2012

It focuses on some of the dwindling Great Movie Palaces and Houses of NYC. Some of which I have been to myself to see some of the most brilliant and wonderful films of my childhood years and beyond. Enjoy!

As I report in today’s print edition, the beloved Ziegfeld, one of only two remaining single-screen movie theaters in Manhattan, is losing money and is in danger of closing with the entire Clearview Cinemas chain on the block. Which, as far as I’m concerned, would be a real tragedy for a city that has seen more than a dozen theaters — including the Baronet/Coronet , Art Greenwich, Chelsea West (nee RKO 23rd St), Tower East and the Coliseumin Morningside House– close in Manhattan alone since I began working the movie beat in 1999.As my pal Ross Melnick of Cinema Treasures points out, New York has one of the worst records of any major city in the country for movie-theater preservation, largely “because the land they’re sitting on is just too valuable.”

The magnificent Loews Triboro in Astoria, Queens, an Moorish atmospheric theater with twinkling stars on the ceiling where my graduation from William Cullen Bryant High School was held, was razed a decade later in 1977 to make way for a row of two-family homes. A couple of blocks up Steinway Street, the Astoria Theatre — where I saw the Three Stooges do a live show to promote “The Three Stooges Meet Hercules” (1962) — was gutted years ago to house a Duane Reade. A few, like Loews Valencia in Queens, have survived more or less intact as churches, while the Beacon and the Gramercy are music venues — and the massive Loews Kings in Brooklyn has stood forlonly empty for decades as restoration plans were discussed.

The situation has been far worse for Manhttan’s historic movie theaters, which have been closing for more than half a century. Follow the links to more information, and photos at Cinema Treasures:

Reputedly the city’s most beautiful Art Deco movie palace with all-wood interiors, it opened in late 1932 and was originally known as the RKO Roxy (until the owners of the nearby Roxy threatened a lawsuit). The 4000-seat Center was doomed a few months later when its even larger sister theater in Rockfeller Center, Radio City Music Hall, switched from being a strictly live-performance venue to showing high-profile movies with a live stage show. Movies were quickly abandoned and the Center struggled as a sporadic home for opera, ice shows and radio programs before being demolished in 1954 to make room for an addition to what is now known as the McGraw Hill Building on Sixth Avenue between 48th and 49th Street. The Music Hall narrowly escaped the wrecker’s ball when its movies-and-stage show format ended in the mid-1970s and it reverted to being used for the live shows it was originally designed to host.

The world’s largest and most famous movie palace when it opened under the sponsorship of Hollywood mogul William Fox 1927, the Roxy boasted six lounges and an on-site hospital and hosted a nationally broadcast radio show. But this 6,000-seat venue always struggled to meet its heftyy operating expenses, even after its trademark stage shows were abandoned and the proscenium was enlarged to accomodate 1950s CinemaScope epics like “The Robe.” The building housing the enormous auditorium was demolished in 1961 (see this striking photo of Gloria Swanson in the rubble) and the space that housed its spacious lobby in an adjoining hotel is now home to a TGIF at the corner of Seventh Avenue and 49th Street.

Famous as the site of a near-riot by teenage girls that erupted when Frank Sinatra appeared in support of “Our Hearts Were Young and Gay” in 1943, the ornate Paramount, boasting an enormous chandelier and theater organ, opened in 1926 at the base of a then-new office tower still known as the Paramount Building at Broadway and 43rd Street. The theater space was gutted in 1966 to make room for more offices. A replica of the Paramount’s famous original curved marquee stands outside the entrance to the current tenant, the Hard Rock Cafe. The equally well-known Brooklyn Paramount was converted into a gymnasium for Long Island University in 1962.

Many of MGM’s most famous hits appeared at this fabled 1919 movie palace — often accompanied by stage shows with the likes of Mickey Rooney and Judy Garland — right up to the Capitol’s final attraction, a 70mm run of “2001: A Space Odyssey” in 1968. The office tower known as Paramount Plaza (no relation to the movie studio) has long occupied the site.

Opened in 1917 Paramount, whose Oscar-winning “Wings” ran here for more than two years. Instantly recognizable by the imposing columns outside its auditorium on Broadway and 49th Street, the Rivoli hosted months-long road-show engagements of films like “The Sound of Music” into the mid-1960s. But like a number of other Times Square movie palaces that survived into the 1970s it was twinned and became increasingly seedy before closing in 1987 to make room for another office tower. Similar fates befell the nearby Loews State andthe Warner (aka Strand and Cinerama ) which were demolished around the same time.

An art moderne gem from 1936 that was run as a first-run showplace at various points by RKO and Loews, the Criterion sank to barely more than a Times Square grind house after its balcony was turned into a separate auditorium and four dank screens were added in the basement in the 1980s. The opening of two new megaplexes on 42nd Street finally finished off Broadway’s last surviving movie palace in 2000, and the space was gutted for a Toys R Us Store.

The most luxuriously appointed of the mid-sized (587 seats in this case) theaters that opened after World War II, this Second Avenue landmark hosted exclusive runs of many Woody Allen movies and even had a cameo in “Annie Hall.” It was still a successful art house when its landlord, Sloan Kettering Memorial Hospital, refused to renew Clearview Cinema’s lease. After a brief public outcry, the Beekman was torn down in 2005 for an outpatient cancer treatement center. The name was transferred to a theater across the originally known as Loews New York Twin.