The parents of a girl who was killed by a savage dog are granted the opportunity to spend three days with their deceased daughter.

Why can’t some people leave well enough alone? Why can’t we as humans be strong enough to let our dearly departed stay resting in peace? It’s a question for the ages and a story device that has been the basis of countless films and books. Wake Wood from the newly invigorated Hammer Films explores this question like movies with similar heady proposals like Pet Semetary and even Frankenstein. David Keating  (Into The West)  directs this disturbing, creepy and tightly woven resurrection tale that is part The Exorcist, part Village of the Damned and part The Wicker Man.

In this neat Irish horror film, the parents ( Aiden Gillen and Eva Birthistle) of a small girl named Alice, played by Ella Connelly, lose her to a vicious dog attack.  They move to the  small hamlet of Wake Wood where Louise (Birthistle) continues her profession of Apothecary work. They soon learn of a strange but real ancient ritual that allows the dead to be resurrected for 3 days in order for the bereaved to spend more time with the departed. Timothy Spall (Harry Potter) plays the town leader, Arthur, who proposes to head the ritual for them in order to be with Alice once more for 3 days. They are at first appalled but eventually the proposition is much too enticing and they agree to the terms.

Keating and writer Brendan McCarthy (Isolation) , in true Hammer fashion, begin to weave a ghastly tale after Alice returns but not in the way that Louise and Patrick think.  How will they deal with this undead Alice and her strange peculiarities? How will they deal with losing her again after the 3 days are up? I feel that in some ways that even though the material echoes other films of it’s ilk that Wake Wood will achieve  a strange type of cult status. The film oozes mood, is very tightly shot by DP Chris Maris (Frostbitten) and has style and some very creepy and menacing sequences. The film, which is a low budget feature, was shot in Ireland and the locales are used in flattering but eerie reverence.

Much like other Hammer films there are weird locals, strange weather, obscene rituals and the obligatory evil force out to ruin what is left of the normal world. Spall steals every scene he’s in and Connelly is superb as the force of evil that will not be stopped at any cost. The ritual is creepy as hell and Alice is hands down one of the most terrifying kids with evil intent to grace the silver screen. 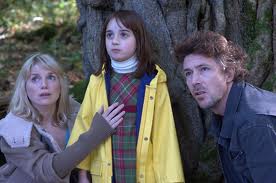 Many questions are brought to the fore in this film about parental responsibility, dealing with natural and supernatural forces beyond your control and the heaviness and futility of loss. The film is indeed original in places and a bit routine in others but the mood, tone and dread are always apparent.  The finale involving  Alice makes great use of some foreshadowing and is gratifying. The film has very little cheese involved and at times is as serious as a heart attack.

You could do much worse on a rainy Saturday afternoon or night than this tricky little horror picture that looks good and unfolds nicely with some good performances and an engaging and suspenseful story. It isn’t Rosemary’s baby nor does it try to be but it handles the big questions with the right balance of fear and terror. Long Live Hammer!!! 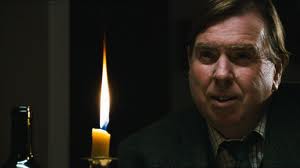