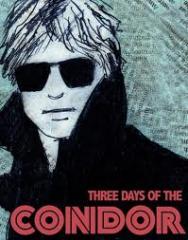 Robert Redford stars as Joe Turner, a New York-based CIA researcher who returns from lunch to find all his co-workers murdered.

“Three Days of the Condor”

“Three Days of the Condor” is a spy/drama thriller directed by the late, great director Sydney Pollack (Tootsie, Out of Africa). Even though it was released in 1975, it remains very ahead of it’s time. It stars Robert Redford, turning in a great performance as Joe Turner, an employee of a very secretive and clandestine department of the CIA. He is involved in a pretty freaky power struggle within the agency and since he is not a field agent gets hung up at every turn by the steely machinations of the plot provided by screenwriter Lorenzo Semple Jr, adapted from James Grady’s novel of the same name. Faye Dunaway portrays Kathy Hale, an unfortunate hostage victim taken by Redford at a ski shop until he can figure what his next move is among all the confusion, deceit and betrayal. The film is stunningly photographed by Owen Roizman, the same talented cinematographer of Bill Friedkin’s The Exorcist.

While out getting lunch one day, Turner’s co-workers are murdered by deadly armed assassins led by the seditious and icy Joubert played so intensely by the awesome Max Von Sydow (The Exorcist, Flash Gordon and Shutter Island ). After getting the code name Condor, he sets out with the help of fellow CIA operative Cliff Robertson to find out why everyone was murdered. Now the reason I say that this film is ahead of it’s time is because back in it’s day the content and subtext that permeate the film was just not prevalent in most modern day espionage thrillers. It gives much thought and depth to foreign affairs of the day which predate many plot twists and turns of many films of the same genre today. That is because Pollack stays true to the material and believes that his audiences are smart, reflective and savvy. He trusts his actors to bring realism to the performances and he really digs using that funky, groovy music of the times, too.

“Three Days of the Condor” is a film of it’s times and it is very reflective of a turbulent era in history where we did not trust our government very much. It is about huge power struggles and intense themes of balances of power.  It is a taut and suspenseful thriller that does keep you guessing and expands our ideals to include things that affect us and other countries we do business with. And it’ll make you think twice before taking a package from a Postman ever again.