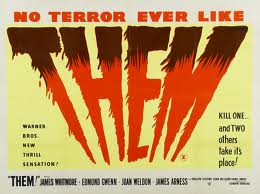 The earliest atomic tests in New Mexico cause common ants to mutate into giant man-eating monsters that threaten civilization.

Them! begins with the startling discovery of a little girl lost in the New Mexican desert wandering all by herself. Two police Officers one by the name of Ben Peterson played by James Whitmore (The Shawshank Redemption and Planet of the Apes) tries desperately to get through to the little girl with no luck. Seems that the little girl has been through some type of trauma. Something she has seen and experienced has her in total shock. It seems that some atomic testing done in the 40’s has irradiated a bunch of ants and they have grown to incredible proportions. The ants are slowly attacking and killing people out in the desert and eventually beyond.

The Feds are called in and Agent Graham played by the very tall James Arness (The Thing and Gunsmoke) arrives to help the local law enforcement. Graham is joined by two scientists. Pat, played by the very pretty Joan Wheldon (The Stranger Wore a Gun) and her dad Dr. Medford played by the surly and versatile Edmund Gwenn (Miracle on 34th Street). They pair up with Graham and Peterson in investigating the strange deaths caused by the giant insects running amok in New Mexico. 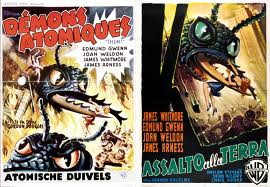 The Medfords discover the ant hive and find out that 2 queens have flown off towards the west coast and landed in Los Angeles to start a colony. Not before they fly around scaring pilots, attacking freighters full of sugar and scooping up young children. But I must admit though the best stuff in this movie happens before the movies shifts to LA. The ants make this creepy sound (recorded tree frogs are the culprits) whenever they are near and upon facing them at the colony in New Mexico the Medfords, Graham and Peterson discover long dead corpses and skeletons. Some pretty graphic stuff for the 1950’s. Unfortunately, Peterson’s partner is killed as well while protecting a general store with the body of the viciously attacked owner in the cellar.

The death toll rises and rises. Even the little girl when snapped out of her trance after smelling formic acid screams hysterically one word: Them. This scene is quite effective and helps to build suspense and mood. Douglas pulls no punches here either. Another effective scene is when the freighter is attacked as well. The radio operator desperately tries to call for help but an ant smashes through the window and wall and starts to devour him alive. Oh and we get to hear the often used “Whilhelm Scream” here. One of the earliest sci-fi movies to use it. I believe it is used 3 or 4 times in the film.

Them! is a very fun and still creepy flick to watch. It is very influential as well.  It remains a wonderful cold war era science fiction thriller that is part hokum and part cautionary tale in the vein of “Gojira” from Toho Films that was released the same year. It is a very smart and well acted precursor to many other novel movies about big creatures and over-sized insects like “Empire of the Ants” and “Food of the Gods” There are  cameos by Fess Parker and Leonard Nimoy too. (Thought I’d mention that for trivia’s sake).

Them! is pure B movie at heart and when  some of the more action oriented scenes ensue like the torching of the ants, the eggs and the colony, you can’t help but be really entertained by what is going on. It is a very well done man vs nature run amok flick. It has a great script by Ted Sherdeman (Hell to Eternity), great actors and no dull and uninspired love story. The effects are top notch too. The ants never look fake and the violence is still pretty intense and a bit graphic. The production design is incredible. The desert is menacing, the sewers claustrophobic and the the inside of the colony terrifying and dark.

Them! remains very astute and never panders to the audience. It starts off being just about some random murders in New Mexico and eventually becomes an event film that remains a great sci-fi movie to this day. It is fun and was Warner Bros. most financially successful film of 1954 even thought the budget was cut and the director opted to film in black and white. It worked out fine though. The film shines in good old black and white. So sit back one rainy (or sunny) day and check out Them! You’ won’t be disappointed by this classic monster flick that is part police procedural and part B grade creature feature about the continuing folly of the Atomic Age. Highly recommended!