A small group of military officers and scientists dwell in an underground bunker as the world above is overrun by zombies.

“Day of the Dead”

Directed by George A. Romero

Here they are in order:

Dawn of the Dead

Night of the Living Dead

Day of the Dead

Land of the Dead

…and those last two horrifically bad entries of Diary and Survival of the Dead don’t even count, unfortunately (even though I have been urged to re-watch them). “Day” though, on a few levels, works but sometimes just marginally so. Romero’s 3rd “Dead” film (I know I am gonna get shit for saying this) can seem a bit choppy, dull and occasionally over the top. It struggles to find that middle ground where the story leaves us with a thought provoking message along with some disturbing un-dead action that made “Dawn” a masterpiece. But on that level, DotD reaches a cool, funky B movie vibe that entices the most hardened horror buff to leave their brains (I’m aware of the pun) at the door and enjoy the Romero ride.

Make no mistake, there is gore a plenty, and Romero successfully blends it all together well  (like when a zombie sits up on a gurney and his innards just pour out of his torso. yuck.) but it feels a bit like too little too late in places. Romero includes way more exposition and human interaction in this entry more than any other of his “Dead” movies. Which is not totally a bad thing. He at least keeps it interesting if not cheesy. That being said, it is the favorite of many Romero fans until this day.

Lori Cardille (Edge of Night and Ryan’s Hope) plays Sarah, who is part of a trio of survivors that are hiding apart from civilization in a fortified underground missile silo / bunker in Florida. The other 2 being a helicopter pilot named John played with humor and depth by Terry Alexander (One Life to Live). The other being Jarlath Conroy as McDermott. “Day” opens up with the trio, along with Miguel (Antone DiLeo – Monkey Shines) )  doing an aerial recon over a Florida city looking for other survivors. Sarah convinces John to land but for only a few minutes.

Turns out that there are no other survivors as zombies, covered in crabs and spiders, begin to slowly creep out into the streets after hearing all the racket that the team is making with a mega – phone. As one zombie comes into frame Romero inserts the “Day of the Dead” title card which serves to put us in the right frame of mind to watch  some well done zombie drama. 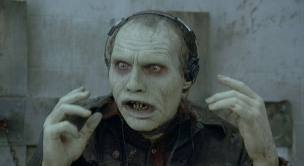 When they get back to the bunker, Romero establishes that the bunker is under military rule and that the civilians are there to help the military find food, supplies and find a way to get the zombie plague under control. Zombies pile up at the perimeters as the helicopter and refueling attracts them in hordes. Sarah tries helping Miguel, who is stressed and without sleep for 24 hours, out of the helicopter but he has a hissy fit and barks at Sarah to back off. Sarah suggests refueling at night when the zombies can’t see them. Once underground Romero gets the melodrama going and it’s blows at us at warp speed. Things are very bad underground.

The age old conflict of pissed off degenerate soldiers, insane scientists with a God complex and tired, martyr-like civilians come into full play here.  Captain Rhodes played with insane energy and scene chewing finesse by Joe (Pulp Fiction and Wishmaster) Pilato. This guy is just plain bad ass and he convinces us that he is not to be fucked with in any way.

He hates the zombies and he hates the civilians just as much. He supplies us with a neck-vein bursting performance that is fun to watch though his zeal is a bit corny.  He clashes with Sarah and her group and he and his men can’t stand the stress addled and afraid Miguel who at every turns displays that he is weak, exhausted and just a waste of good dog tags.

No cautionary tale of zombies and their sub-textual place in film would be complete without the mad scientist. Here he is Dr Logan or Dr Frankenstein as Rhodes calls him.  He is played by Richard Liberty (The Crazies and The Final Countdown). Liberty’s performance here is one of the better things about the movie. He plays it straight and manages to convince us that while he is insane, he is genuinely trying to relate and get to know the creatures. Rhodes and his men don’t quite see how Logan’s work and experiments are going to solve anything and Logan even keeps one zombie chained up named “Bub” who is ex-military and beginning to shows signs of intelligence and domestication.

These are some of the better sequences of the movie as Romero shows us for the first time in his “Dead” films, a human and zombie relationship. I thought it was deep and a bit profound for the film. What it gets bogged down with is a directionless story. What is “Day of the Dead” trying to be? It seems at times to be a strict relationship drama with the usual suspects. Other times it feels like a metaphor driven zombie analysis that come across cold and uninteresting. The zombies have a place now in nature according to Logan and his “Instinctual” theorizing is eloquent but ultimately a bit under explored.

What I feel happen to Romero here was trying to one up the insane success of “Dawn of the Dead.” “Day”is released on the heels of “Dawn” and Romero has the daunting task of serving up a darker more precise film. It does have it’s loyal and diligent followers that believe it is the best in the trilogy and I can see that but for me it feels a bit disjointed and unable to serve up a tight story that makes you think. Perhaps this was Romero’s intention. Perhaps he wanted to approach the mythos with a more formulaic convention. It just didn’t gel all around for me. I felt the story, performances and pacing were a bit off keel here.

What I DO dig about it –

– Cardille and Pilato are great to watch. Cardille for her soap operatic background and restraint. Pilato for his off the wall, aneurysm inducing hysterics.

– A cool score by John Harrison that starts out a bit adventurous but turns out to become menacing and full of  dread.

– Excellent, but rushed, ending. It is actually upbeat and instills some hope.

– Bub (played by Howard Sherman) steals every scene he’s in. He salutes, listens to a walkman, pretends to shave, reads Stephen King and knows how to use a pistol. Pure awesomeness.

– Miguel’s meltdown. He releases the zombies on himself and the Bunker survivors. Totally insane scene.

The film has it’s merits for me and is still, ultimately exciting and scary, but it just doesn’t reach the intensity and masterful stroke accomplished by Romero (What sequel could?). Definitely worth a watch if one hasn’t seen it. Recommended!