A sleek, possessed car terrorizes everyone it comes in contact with.

Damn, “The Car” is a lot of fun. It’s cheesy, hokey but it just about takes itself seriously enough to warrant some respect for it’s pacing, characters and by doing so cements it’s place among some other like minded films. I mean films like Christine, Duel and Death Race from the house of Corman. You’re out with the fellas at a bar and while the women are ignoring your dumb asses one of you asks: “Hey what’s your favorite killer car movie?”…odds are that one of you horror geeks will say “The Wraith” or “The Cars that Ate Paris.”

Good choices but I would be the one guy there that would say with cheeky abandon…“The Car” Why? Well I could say why not? I mean some people love “Maximum Overdrive” too. I think it’s nostalgia for those wild and crazy days of 70’s horror where most of these movies make absolutely no sense and you could easily believe a story about some huge black car that is possessed by the devil…or Elvis… or something…

Elliot Silverstein (Cat Ballou, A Man Called Horse) directs this thriller for Universal Pictures and co-written by Micheal Butler (Pale Rider, The Gauntlet). It stars James Brolin (The Amityville Horror) as Sheriff Wade Parent (cool name huh? yeah, I dug  it too) who is a single parent of twin girls played by the Richards sisters (Assault on Precinct 13) and has a cute girlfriend named Lauren played by the always spunky Kathleen Lloyd (It Lives Again).

Things start off well here in Santa Ynez except the town is in for a few days and nights of complete horror as a loud and very evil black car (A Lincoln Continental Mark III) barrels it’s way through the county first plowing over some teens on a bike ride, off a very high bridge no less, then running over an annoying hippy hitchhiker that can’t play the trumpet to save his life.

Local law enforcement gets involved. Sheriff Everett played by John Marley (The Godfather) tries to get witness R.G. Armstrong to describe what happened. There is some bad blood between them. I guess that Everett pines for Armstrong’s wife who is abused by him. Wade also gets involved in the strange case after his friend, also an Officer, knows one of the teen victims. Ronny Cox plays Luke who is also a recovering alcoholic but is driven to drink by the death of his friend.

Well, there is more plot and story and mayhem but let me get to the production and why I liked the film. Brolin rules here. He’s cool, he’s calm and always collected. He is a take charge kind of dude and he is a cool dad and even cooler boyfriend. He oozes macho appeal. The subplots with Marley and Armstrong is intense and you feel bad for Marley’s Everett as he tries to connect with her over her husband’s objections. It’s tough to watch as the old crow is run over by the Mark III.

Lloyd is clever and energetic as Lauren who is a schoolteacher caught up by the madness of The Car’s murder spree as she protects her co-workers and school children in a cemetary that The Car cannot enter. It is one of the cooler moments of the movie. The Car swerves to and fro and screeches around the consecrated graveyard. It’s a creepy scene. It appears The Car cannot enter to get to it’s victims. Silverstein manipulates The Car like it is an animal. A sort of land locked “Jaws” It works and it is effective. The Car is a force of nature and no one, not even Wade understands what it is and what it wants. It just kills and kills and can’t be stopped.

It runs over band marchers, children, Cops and civilians with no prejudice. The horn, a great death knell, blares with otherworldly menace. After so much mayhem and death, Wade an his men including Cox who falls off the wagon, make many attempts to figure out how to corner this monster on four wheels.

During the third act after Wade suffers a loss does Silverstein start to crank things up. The pace and energy increase tenfold as Wade and the Officers figure out one last plan that may get some results. The Car sports a blaring Berlioz infused score, some great scenery and killer camerawork that is fast and furious. It isn’t terrifying or gory but it is fascinating in it’s simplicity. Though not as famous or as successful as other killer car movies it is still very good at what it does and that is entertain.

A solid cast and some very malicious subtext is high on the list of points to get across with The Car. But even if you don’t really understand the beast as least you fear it and try to fight it. Plain and simple. whether it be a shark, a car or even a killer doll. There are things out there that can kill us. Enjoy The Car, gang. It is a giddy and spooky way to enjoy a rainy Saturday afternoon. Honk Honk!!!

Hmm… Futurama’s “Were-Car”… I think I see a resemblance. 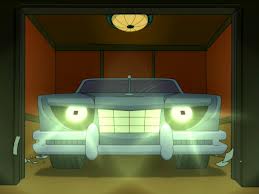 Leave a Reply to That Dutch Filmlover Cancel reply