Hey gang! Usually, I trim most lists down to a Top 5 but in this particular case I feel that there are enough pretty good haunted house flicks out there to warrant a Top 10.

Some of these picks will not be plain Houses to say…some may be something bigger or even more elaborate than your basic haunted dwelling. It can either be a mansion or a hotel or even…oh hell, you get the point just read on and have fun! I will keep the descriptions very short for brevity’s sake, too. Don’t forget to chime in with some feedback if you don’t see one on the list that you think should have been included.

Remember this is NOT a  best Haunted House Movies list!  Just the houses themselves must be haunted. Then it can  make the list as the scariest and they aren’t in any order either.

Cavernous, twisted, ghostly and extremely powerful. Stephen King’s immensely popular Hotel from his novel The Shining gets an amazing and terrifying film counterpart from no other than Stanley Kubrick himself. Kubrick makes The Overlook Hotel a character all on it’s own.  Menacing and involving camera work and the restless dead that slowly drive Jack Nicholson insane are some of the reasons that puts The Over Look Hotel easily on the list.

Gothic, dark, winding and minimally lit hallways (Shot by Freddie Francis) and spirits that are out for vengeance makes this large British Estate frighteningly realistic. The Estate leaps out at you much like it’s literary counterpart from The Turn of the Screw by Author Henry James. Deborah Kerr has the solemn and dangerous duty of facing these unwanted phantoms in a very haunted home that also houses 2 innocent and endangered children. The Mansion is actually located in Sheffield Park, Sussex.

A young brother and his sister (Ray Milland and Ruth Hussey) in Lewis Allen’s eerie chiller fall in love with a seaside Home and find out that some “not living” entities live there too. Entities that can take over one’s body. DP Charles B Lang lights the house with quiet menace and uneasy shadows and noises permeates the breezy ocean view estate. It is just plain creepy and very effectively photographed in black and white. Even the winding stairs are spooky and precarious much like the cliff the house sits upon.

Scary Windward House Moment – Rick hears the disembodied voice of a woman crying. Creepy and it easily gave me goosebumps.

Where do I begin on this one? Insanely haunted by the spirits of relocated dead people, The Freeling home looks just like any other Suburban home until Tobe Hooper pulls all the stops and completely scares and terrifies the shit out of the audience. Closets that suck people in, TV’s that channel ghosts, possessed clown dolls, lights that spark and pianos and furniture that move by themselves. We get it all here in this wildly scary film from 1982.

Scary Freeling Home Moment –  Paranormal Investigative dude rips his own face off over a utility sink and also sees maggots erupt from a rare piece of steak. Gross and Grosser. Scary shit.

The film’s terrifying and tragic opening sets the tone for the rest of this very creepy film from 1979 based on Jay Anson’s popular book. Based on the haunting of the Lutz family, the film outright makes the Amityville house a villain and a very monstrous evil that succeeds in making the audience uncomfortable and afraid of what may come next. The house has copious amounts of flies, toilets that ooze tar, bleeding walls, cold spots and noxious odors that makes Nuns puke. Let’s not forget that creepy basement and the “red room”

Scary Amityville House Moment – The “Get Out” scene with Rod Steiger. Classic and completely fucking chilling. A rare horror movie scene where I want to cover my ears rather than cover my eyes.

This large and cavernous house in the Channel Islands is shot beautifully by Javier Aguirresarobe. It surrounded by fog, huge trees, lush countryside and what is within it’s haunted walls is even more terrifying to say the least. Large rooms abound with maze-like hallways and inter-connecting rooms that need to have the large doors secured from one end to the other. Since it is always dark and dim within  it’s interiors (part of a plot device) the house always appears menacing and foreboding.

Another quaint and un-assuming house makes the list. No battlements, no moats or large gargoyles  to make it scary. What makes this house so scary for me is that the hauntings occur matter of factly and gives the house a chilling and other-worldy dimension. Based on the popular “A Stir of Echoes” by the brilliant Richard Matheson, the Witzky home is always creepy and you never know what lies around each dark corner. The basement is hands down the scariest section of the house as David Koepp deftly creates a claustrophobic residence that hides a very evil secret.

A scary Witzky House Moment – As Tom prepares to rest on his Sofa, “Ghost” Samantha appears next to him. It scared the bejesus out of me after I first watched it.

3 – The House on Haunted Hill

While not completely scary, The Loren House from William Castle’s famous movie sports some freaky images that stay with you long after viewing the movie. Presented in “Emergo” there are Vats of acid, dark and frightening rooms, walls that move and the famous floating skeleton. Castle brilliantly plays it a bit hokey but many films since use the same type of suspenseful and goofy gimmicks to set their haunted house movies apart. Poltergeist come to mind with the “moving chairs” sequence. At first it’s weird and fun but later it gets real and horrifying. I feel this Vincent Price haunted house film deserves to be on this list

Scary Haunted Hill Moment – The Skeleton rising out of the vat of acid. Classic and spooky for sure.

Ok, now we are getting to the good stuff. Shirley Jackson establishes that her literary Hill House is a character on it’s own. Robert Wise follows her lead (with the help of writer Nelson Gidding) and his Hill House is just an amazing thing to watch. Ettington Hall in Warwickshire UK stands in for Hill House. It was used for the exteriors after being picked by Wise from a list of British Haunted Houses. With the combination of 30-40mm lenses for Panavision, infra-red film stock, lighting and camera settings (low angles for example) Wise and DP Davis Boulton brilliantly create their “Monster House” It is claustrophobic, eerie, menacing and just about every other frame is filled with corridors, hallways and rooms that drip dread, evil and implied horror. Robert Wise makes the audience uneasy at every turn by having his actors react to Hill House very naturally and honestly. It’s what you don’t see that will scare the shit outta you. Highly recommended.

Scary Hill House Moment – Eleanor, believing it to be Theo, feels a presence in her bed while it holds her hand. 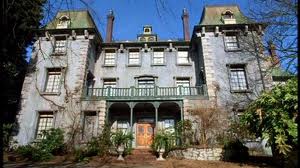 Wanna know a secret? The Carmichaell Estate is one big prop. The House was a large exterior mock up used by Medak and the cast and crew of this terrifying haunted house thriller which is still, to this day a very chilling and suspenseful horror movie. The interior scenes were all sets and they are impeccably rendered here. I looks just like a real house! DP John Coquillon shoots the house from every conceivable angle.

Low, establishing, tight and even POV. The house has long winding stairs, large eerie windows, cavernous hallways, secret dusty and spider webbed rooms, vines that appear alive, closed off passageways and a rustic kitchen that has a strange plumbing problem. There are loud banging noises, sounds of children crying and windows that explode outward. Like I said earlier, this list is not in any order but I would definitely say that this creepy house could easily be the top spot on many people’s list. Don’t miss this one gang!

Scary Carmicheal Mansion Moment – When George C. Scott watches a small red ball, which he tossed off a bridge, come back down the stairs when he returns.

Let me know about some of your scariest haunted houses! Sound off, gang!

The House on Haunted Hill (remake)