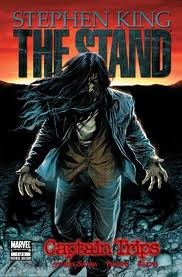 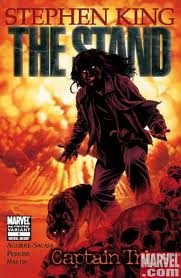 Based on the Novel by Stephen King

“Captain Trips” is the first of Six Series of “The Stand” Comics pushed out by Marvel Comics in all it’s dynamic and horrifying glory. It is a very high profile comic for Marvel and Sacasa, Perkins and Laura Martin make a great team here. “The Stand” for many, remains Stephen King’s best piece of work and it is held in high regard. It has been made into a popular and successful TV mini-series helmed by King mainstay Mick Garris (Bag of Bones). It is the kind of large, mysterious and complex story that has begged for a comic book adaptation and Marvel Comics appeared ready to take it on and they do so in terrifying and fascinating fashion. 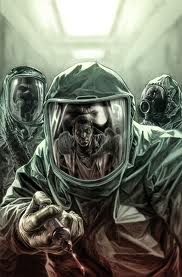 “Captain Trips” follows the opening and introduction of the tome introducing us to the super- plague that decimates the United States. Named “Captain Trips” by the military and scientists, it is a powerful biological weapon that gets free and wipes out anyone who contracts it. But in grand King fashion there is so much more to this story. Some are immune to it and some become changed. Issue 1 starts with the Campion family making a last minute escape from a military base in California. Charlie, the father and husband knows what has been released and tries to flee with his family. He gets as far as Arnett, Texas where they all die but not before they crash into a gas station and continue the spread of the disease. 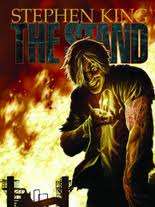 Sacasa weaves the story brilliantly and introduces us to the main players of this outstanding story of the apocalypse done  the way only Stephen King can do it. Stu Redman seems immune and the CDC wants to know why. It seems that Stu (and many other characters) are having very vivid nightmares that involve a tall, red eyed man who is both menacing and frightening. Sacasa also gives us Frannie Goldsmith who loses her Dad in Maine. A down on his luck musician who tries to reconcile with his Mother in NYC and one of the more beloved characters named Nick Andros (a deaf mute) who ends up on foot and travelling through Arkansas. 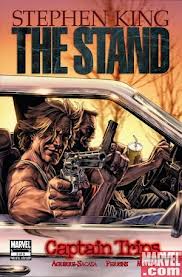 Mike Perkin’s artwork is very well done and realized. He is perfect for the genre giving us some well framed landscapes, anatomy that is consistent and real. His panels flow well and he captures the bleakness and even the emotions of his drawn characters very well.  Laura Martin’s colors are vibrant, rich and enveloping.  As the issues progress the story continues to unfold about the decline of the civilized world and all of the small bands of people who are all travelling to see a mysterious old woman who also appears in their dreams. All of society has become sick, dead and infected. “The Walking Dude” or Randall Flagg seems to be a malevolent force that feeds off the evil, sick and destitute populace grows in strength.

“The Stand : Captain Trips” is a great intro and adaptation that unfolds nicely and gives us a very realistic tapestry of characters and situations to enjoy. I’ve only mentioned a few. There are many more to come as the readers continue with Sacasa’s, Perkins’ and Marvel Comics’ epic telling of King’s Book. Trash-Can Man, the pyromaniac being one of them. Let’s not forget the saintly old woman known as “Mother Abigail” whom so many characters flock to see. Will she and Randall Flagg meet and have a showdown of good vs evil> They might. Read these awesome titles and find out. Even if you’ve read the book numerous times, having them in fine comic book form from Marvel is amazing. Enjoy!

Other Series in “The Stand” Comics are

The Night Has Come