Brought back from his dead moldering remains with blood drooled on them by one of the bats he commands, Count Dracula once again spreads his evil from his mountaintop castle.

Roy Ward Baker (Quatermass and the Pit and Asylum) directs the incredible Christopher Lee in Scars of Dracula which is a decent but off the wall entry in the Hammer/Dracula canon. It breaks continuity from the rest of Lee’s films. The one before being Taste the Blood of Dracula directed by Peter Sasdy who did Countess Dracula. Instead of England being the location we are now back in Dracula’s homeland. The film does have it’s detractors, unfortunately, but the film delivers some chills and suspense that even more popular entries do not have. We get a real pissed off and evil Dracula from Christopher Lee here. So, the movie does have it’s moments but it tries it’s best to rise above the slim pickings of a story.

Lee’s Dracula is resurrected (once again) by the vomited blood of a Vampire bat. I think I read somewhere that it’s the death scene of Taste in reverse. Pretty economical of Hammer, eh? The villagers get a mob together and storm Drac’s castle and there they run into Klove who is Drac’s controlled minion. Despite the unrest, Klove (Patrick Troughton of The Omen) is overpowered and they burn the castle down. They don’t get to Dracula because he’s in a crypt way down under the castle. Later when they return to the village they find that Dracula has sent evil Vampire Bats to decimate the women and children. Yeah, it gets pretty ugly. It’s a good start to the film supplying enough suspense and back-story to carry us through. 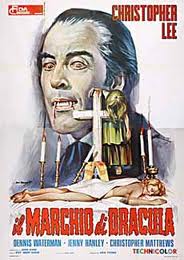 Christopher Matthews play Paul who is on the run from authorites after being accused of rape. He jumps into a carriage that ends up at Dracula’s castle. He eventually gains access to the castle and meets Dracula himself. He falls prey to Dracula’s vampire bride  but before she can finish him off Drac enters and repeatedly stabs her in a very gruesome (even for Hammer) death scene.

Klove takes the vamp chick and disposes of her chemically. Paul tries an escape but come close. He ends up in a dark and empty room. What I did like here is the similarities between the film and Jonathan Harker’s trials at the castle from Stoker’s book. Paul in many ways mirrors the Stoker character for example being bit by a female vamp and trying an escape. I rather liked that the movie supplied us with the parallels.

Afterwards Paul’s brother,  Simon (Dennis Waterman) desperately searches for him and he heads to the Castle looking for answers. He, of course ends up bringing his fiancee, Sarah (Jenny Hanley) with him not realizing that there could be some danger. They meet up with the locals at a pub and they are directed by a woman to Dracula’s castle. They arrive and Dracula immediately has plans for Sarah. Lee actually gets a fair amount of screen time in this entry.

Much to the film’s credit, the story mirrors Stoker’s vision pretty accurately except it uses different people. Lee has more lines, plays a regal count then he turns deadly and very evil. It’s a stark contrast to some of his other turns as Dracula. Klove wishes to get it on with Sarah and pities the young couple and in another brutal scene we watch Dracula whip poor Klove with a hot knife or rather a sword.  Lee is just insanely vicious here. He seems to revel in it and he gives us a very articulate performance but when he cuts loose he really cuts loose.

Dracula is way more intense and there is a very high gothic quotient here that will please die hard fans of the sets, lighting and set direction that made Hammer films so incredible. The film is bloody and very imposing. Many non-fans of the movie believe (some rather fervently) the film to be routine and not very classy like some other productions but in it’s defense it retains energy and suspense. Lee really turns his performance up and plays a really scary vampire with an agenda and it’s to get what he wants when he wants it.

He is actually mesmerizing  here. Troughton as Klove is eerie and sympathetic. I have to give Baker and writer Anthony Hinds (The Curse of the Werewolf) much credit here as they actually make an effort to make a very Stoker-esque movie. It pales slightly in comparison to many other of Hammer’s Drac movies and I think that (no offense to the local priest in this movie) it could have use Peter Cushing but I’m nit picking. 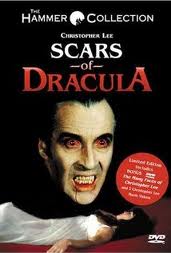 The movie has tension enough for two Hammer movies and it’s violent and sadistic. Lee is very entrenched in the role and there have been rumors that Baker wanted to dis-own the movie at one point. Too bad. It isn’t really that bad but I can’t really score the film too high because it did have a very average story that is just a sort of rehash of other Hammer films. It was a bit predictable in parts and the acting a bit clunky but it’s all part of the charm the Hammer films have.

More and more people and fans have come forth and defended the film and called it an under-rated “gem” I agree. Somewhat. Some may find fault with Dracula’s very cool demise at the end of the film or the effects or the cheesy sets. I think they have some merit in their assessments but I believe the bar had been set high with previous entries like “Horror of Dracula” or “Dracula: Prince of Darkness,” where Lee barely utters a complete line.

Don’t miss out on this one gang. You may find yourself surprised by Baker’s and Hinds brutal approach. I think Lee was cool with it. Enjoy!