After a “Bigfoot Hunter” claims to possess the body of a dead Sasquatch, a disgraced investigative journalist stakes his comeback — and the lives of his documentary film crew — on proving the find to be a hoax.

I love all things Bigfoot. I like all the mystery, what if’s, sightings and confessionals of those who have claimed to have seen Bigfoot. I have just about every documentary (Bigfoot Lives is a decent one) available about Bigfoot in my Netflix queue. I also have  the TV shows “MonsterQuest” and “Is It Real” in my queue as well. So, yeah I dig all Bigfoot related things. I’ve even watched all of the cheesy movies about Bigfoot too. From “Sasquatch” to The Asylum’s / SyFy Channel opus named simply “Bigfoot.”

The Legend of Boggy Creek is a more popular title that has a unique cult following. So, upon getting ready for watching Director Corey Grant’s (Studio and Hip Hop Task Force) I tried to clear away all of the Bigfoot info, data, and investigations in order to start with an open mind. I wanted to get in a different mind frame to enjoy this movie and see what the filmmakers had to offer. 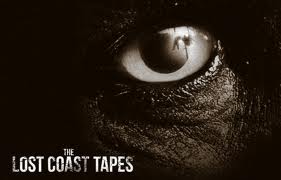 First off, it is a POV style, mockumentary  movie that is wrapped up in the conventions of a Found Footage film. Immediately I once again groaned aloud. I sucked it up though. I did know it was a FF movie in some capacity anyway but it’s just that I have been inundated watching FF movies lately (most of them are terribly done). Oh well, what’s one more, right? And it’s about Bigfoot! OK now…a little backstory.

Sean Reynolds (Drew Rausch) is a TV/Doc producer who takes out a large sum of movie from his bank in order to pay off an isolated woodsman named Drybeck  played by Frank Ashmore (Airplane and V). What Sean is paying for is for Drybeck to show him around his Bigfoot occupied property in the woods.  The big kahuna though is that Drybeck claims to have a Bigfoot carcass.

The opportunity of seeing and documenting this has Sean in a frenzy. He and his mouthy and sarcastic camera-man Darryl (Richard McDonald) head back to the TV studio and gather Sean’s ex girlfriend, the very cute Robyn played by Ashley Wood (Argo, Prime Suspect and Sullivan and Son) Why are there always an “Ex” in these movies?

Anyway one of the crew won’t go because it’s an investigation  into Bigfoot and he thinks he would be in danger if he goes. The reason he gives, you ask? Because he’s black. Come on? Really? Writers still use that old material? I thought that was lame using the “I’m black so I’ll be killed off first” trick. Been done a like gazillion times. The actor who plays Curtis (Japtheth Gordon) royally acts so over the top that the whole exchange feels forced and phoney. Kind of over scripted or over rehearsed. He is the first sign of what to expect from these actors. Sean, to be fair is over zealous as well but it fits the story since he is very excited about the investigation.

Sean plays the skeptic angle throughout. He thinks he can debunk the stories but is still interested in seeing the Bigfoot body. So, Curtis is out and the very nervous and smelly Kevin takes his place as the sound man. Kevin is played very amusingly by Noah Weisberg. (The Good Wife) We are automatically fans of Kevin. He is funny, like-able and enthusiastically played by Weisberg. He is genuine, too. He has a problem staying out of the frame while taping and even hits Sean, the host, in the head with the boom mike. Weisberg delivers his  funnier  lines with affection and he never comes across too heavy or zany.

So, they take off to the “The Lost Coast” of California. A place where Bigfoot sightings are very frequent. So far the film has a decent premise and the set up is a bit forced but eventually settles up. We do feel like investing in the rest of the movie and what is yet to come. The exchanges between them all vary from biting and funny to just over the top and corny – Kevin upon receiving a hood from Drybeck says “Great, he’s with the freaking Taliban.”

So ,yeah we get some decent exchanges but most times the characters aren’t as witty as we are lead to believe. “The Sasquatch big stick. Actually made from ground up Sasquatch ass.” Yeah we get doozies like that one. Drybeck himself is down right serious and very strange. He is grizzled, bearded and every bit the stereotypical outdoors-man /hunter. He has a fortified home and some shacks that he keeps on his property. The group settles in and Drybeck gets things ready for dinner and his interview afterwards. 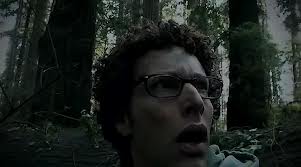 So, to be brief here, Robyn is some kind of psychic/medium type that tries to commune with the forest or something like that. Kevin and Darryl bitch about the sleeping arrangements and Sean as usual is very excited and always wired. Eventually we do get to the interview where things get a bit more interesting. Finally. But I’ve seen worse set ups. The interview is well shot and framed. The lighting is dark and fiery as they interview Drybeck.

I won’t go into further details but later that evening they get attacked at the cabin by something or as Sean would believe – someone? Yeah, there is some random dude out there in the woods that we glimpse very quickly. Also the electrified fence is almost torn apart by a huge tree branch. So the next morning Drybeck hightails it outta there with the only jeep. The crew freak out and eventually head out to find out what is going on. Sean seems to be on a mission to debunk everything even some footprints they find in the mud.

From here on we get meandering dialog, hit or miss acting. Not one actor can stay consistently good in their performance. Even Rausch goes bananas at one point talking into the camera with eyes widers than hubcaps. Weisberg is the only actor who when given really dumb things to say like “I hate you and I hate your shirt” comes across as sincere. The rest not so much.

At one point after a confrontation with Drybeck (who returns with an injured friend) they head out with an attacked Robyn in the stolen jeep. When the actors, except for Ashmore, get scared, excited or afraid it comes off very hokey and a bit over dramtic for the good of the film. It feels almost like a sketch play where the actors emote with abandon. Even at one point Ashmore is guilty of it, too.

In it’s defense, TLCT is well shot. During the longer  dialog exchanges the camera is pretty steady and everyone is in frame and the shots well composed. It doesn’t last though. We get the obligatory running and screaming in the dark forest. At one point we can’t make out anything that is being revealed on camera, It’s very disorienting and a bit too much like Blair Witch. What Corey Grant does is to completely deny us of any suspense, fright or even some flat out horror. Ashmore is the scariest part of the movie. We get noises, moans, grunts and howling of course but none of it is too scary. Too bad. It regresses into a standard running, screaming and people freaking out show.

Too many of these movies are shot in the woods or outdoors. I’ve become way bored with it all. It’s frustrating to see these characters make really dumb decisions. TLCT comes across as redundant, gimmicky and boring despite some interesting moments of character development. I’m reminded a bit of the vastly superior FF movie called Grave Encounters except that TLCT lacks some real tension. And the Bigfoot angle? It’s the only reason I stayed with it. Well, it has a pretty interesting ending I must say.

It’s a decent effort and the film at times doesn’t always feel like a found footage movie . Ashmore as Drybeck and Weisberg are the only good things to watch here. Unfortunately the movie has little redeeming value except for a nice little concept that comes too late in the film. Check it out if there is nothing better to watch and in that case I’d rather watch The Twilight Zone.