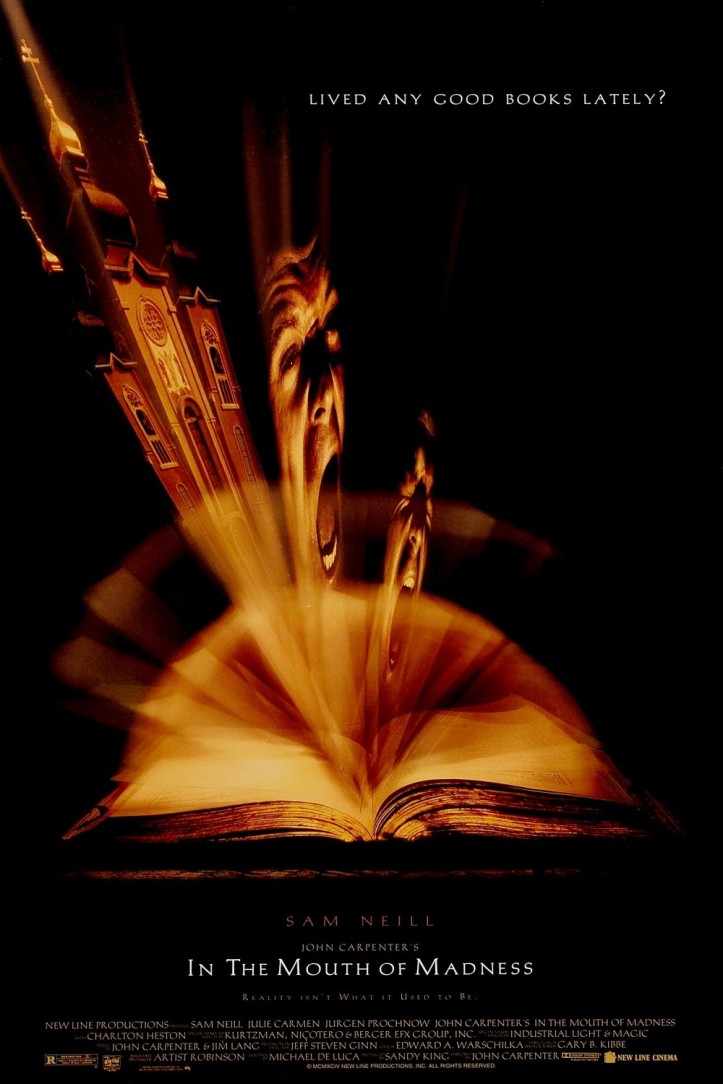 An insurance investigator begins discovering that the impact a horror writer’s books have on his fans is more than inspirational.

“In The Mouth Of Madness”

It would be very easy to dismiss Sam Neill’s performance in this film. After all, with all of the scares around him and the great visual design, it’s easy to get lost in John Carpenter’s vision. But, it’s because of the way Sam Neill reacts that the story is elevated to the next level and truly draws us in.

“In the Mouth of Madness” is, in my opinion, the most underrated film in John Carpenter’s filmography. It is the only film that has successfully created what it’s like to live in the mind of a horror author. The only true way to do that is to leave it open ended as to whether the main character of the film is truly going through the experiences we see or this is simply a delusion within a brain that is mentally ill.

Carpenter has a lot of fun toying with the audience within dream sequences, violent flashes of blood and gore, and a trip to a fictional world filled with both laughs and horror. We aren’t meant to take this film at face value and it creates a feeling of unpredictability that most horror films lack. You’ll be scratching your head several times wondering what direction this could possibly be heading and I can guarantee that you won’t predict it correctly.

I have always felt that is what separates John Carpenter from the rest of the horror directors. He has never gone for the obvious cliches but has reinvented the genre more times than any other director with Halloween, The Thing, Prince of Darkness, and this film as well. It would be easy to splash a bunch of blood on the screen and expect an audience to pay for a ticket knowing exactly what they’re getting. Instead, he takes a different route and keeps us on the edge of our seat by making us feel like the story is totally out of control and removes our comfort level that would normally be there through story predictability.

That approach has made great films but not always successful ones financially. In the Mouth of Madness was not a hit. It barely made back its modest 8 million dollar budget back in 1995 despite positive critical reviews. Horror films were going through a transition during this period and were more focused on sequels to brainless slasher films than it was on creating something daring and different.

I think that’s why after all these years I’m still discussing and recommending it while all of those other horror flicks that made more money have become completely obsolete.  This film is a love letter to every person who ever read horror novels. I would not be surprised if new generations re-discover this gem and find out what a truly original piece of work this truly is. H.P. Lovecraft would be incredibly proud.