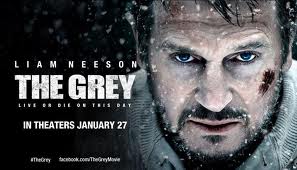 After narrowly surviving a deadly plane crash in the Alaskan wilderness, a band of oil riggers must fend for their lives in the ice and snow. But thanks to wolves that view their presence as a threat, they aren’t alone.

This is a film who’s deepest strength is presenting the characters as beings who’s will to survive is far stronger than the lives they’re actually saving.  Director Joe Carnahan has triumphed here.  The Grey is the best film about survival since John Boorman’s “Deliverance.”  In many ways it’s actually better.  First, the visuals are fantastic.  The photography here is as bleak as the story and it presents whites mixed with greys to create a feeling of gloom without stifling the viewer.

The environment looks breathtaking.  The backdrop of mountains that go on forever, streams that run off into nothingness, and trees that shroud everything are as well shot as anything I’ve seen the past couple of years.  As beautiful as it looks, it never comes at the expense of showing a wilderness that isn’t ripe with terror.  The characters are constantly being victimized by not only by the wolves but by the harshness of nature itself.

The characters are very good all the way around.  They are never presented as caricatures but as real people that may react as you or I would if they were in this situation and the performances reflect that. All of the actors are very good but Liam Neeson, one of the best working today, is the anchor holding the whole story together.  His presence in any film adds legitimacy but here he just dissolves into the part.  As the story progresses and we learn more about his character, we empathize and relate to him even more.  You just can’t help but root for him to make it through this hell.

I have to admit that I was shocked to find out that the last film Joe Carnahan made was The A-Team.  That film was an absolute disaster that was drowned in its own stupidity.  The Grey is the opposite: smart, suspenseful, daring, sad, and shocking.  So far, it’s the best film I’ve seen in 2012.