When a sunlight-phobic teen (Junio Valverde) moves to a remote mountain town — coinciding with a series of mass killings — everyone naturally suspects the strange newcomer. But the forest holds a spine-tingling secret that explains everything

“Shiver” is a Spanish production produced by the team responsible for the success of Pan’s Labyrinth and The Orphanage. Two films Guillermo del Toro was involved with. Young high school student, Santi,  played by Junio Valverde, and his mother Julia, must move from their big city in Spain. The reason being is that Santi suffers from a dangerous sensitivity to light. The small mountainous town they relocate to has shorter days with sunlight due to it’s location.

The old house they move into is surrounded by a dense, mysterious forest that is immediately menacing and strange. It is established that Santi and his mother are strangers and they have to make great efforts to fit in. Julia with the townsfolk and Santi at school where he tries to keep to himself.

Shiver is a beautiful film to watch. The photography Josep Civit is stunning. We have time lapse scenes and great wide shots of the terrain and foreboding forest. It unfolds at a generous pace and never feels forced or fake. We care for Santi as he tries to understand the strange things that are going on in the forest and the fatal attacks on people and livestock in the woods.

What’s harder is that Santi has to prove he is innocent to the father of a young girl he likes that is a constable of the town. Santi becomes a suspect and when his long absent father arrives he is forced to deal with uncertainty and danger. He recruits his friend from the city to come and help hunt what is loose in the woods.

Shiver is a fairly well put together film. It’s a good looking movie with wonderful lighting and framing. It has mysterious sounds, some graphic attacks and mood as well. The darkness is frightening and Santi and his family are faced with a grim creature or animal that stalks them. But why are they being stalked? Here the film gets a bit predictable and pedestrian. We find out more of what happened to the previous residents of the house and what happened to one particular member. The climax makes up for the short comings and it is brutal yet very touching as well.

The capable score by Fernando Velazquez is endearing at times and when it needs to be appropriately chilling. Santi comes of age in this film and he sustains bravery with his girlfriend, city friend and his mother at his side. As we take the journey with him we are forced to experience the fear with him. I was impressed with this production that has a Del Toro feel to it. Part of the great Spanish fable horror that has been very entertaining of late. Recommended! 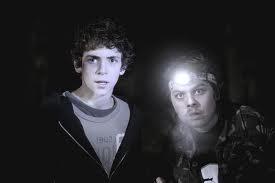