After a violent incident with a special chemical, a research scientist is turned into a swamp plant monster. 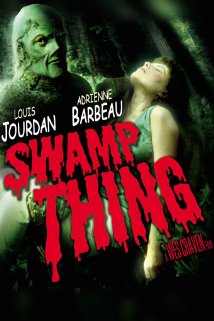 After re-watching “Swamp Thing” I realized how much of a crush I had on actress Adrienne Barbeau back in the 1980′s. How could I forget? My oh my. But I digress. As my latest Movie Camp review I decided to pick a fav of mine that I originally saw in the Bronx way back in 1982 called “Swamp Thing” – based on the DC comic and directed by horror master Wes Craven (A Nightmare on Elm Street).

I remember very well having a blast watching this film and afterwards recommending it to my friends but warning it’s no masterpiece and to expect some camp and cheesiness. Suffice it to say, some of my friends gave me grief about it.

The film stars Barbeau as a government agent named Alice Cable, Louis Jourdan as the cold and ruthless scientist Arcane and Dick Durock as Swamp Thing. After an experiment goes awry, a scientist is turned into our fave plant-like hero who swears to avenge himself upon Arcane while protecting Cable who is wrapped up in the middle of it all. At times I did find myself asking: was I watching a Wes Craven film?

And what the hell was he smoking? His take on Swampie was as campy as you could get with bad costumes, bottom of the barrel acting, cardboard cutout characters, henchmen and funky monsters in cheap rubbery suits that looked like they were bought at a local drugstore. But I totally dug it. I just went with it all. Even though the protagonist do the most stupid things throughout the film you still root for them and want the aloof, over the top, bad guy to get his ass kicked.

I can go into more of the specific cheesiness and camp value of the film – trust me, there’s plenty – but back to Adrienne Barbeau. After sitting through watching her in John Carpenter’s “The Fog” wearing nothing but flannel it was great watching her in Wes Craven’s film well, wearing nothing. It was a great reminder of why I had that crush on her